Top 12 Anime Characters Of All Time 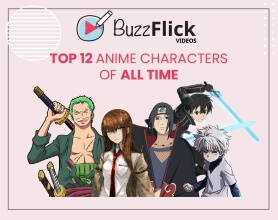 This article consists of reviews about the top anime characters that played their part in different anime making it the best anime in history.

You cannot just judge an anime by its animation or its overall storyline. There might be some characters whose life story or character development is written in such a way that it can easily win your heart.

Most of the time, it is seen that regardless of what age group people are from, they are in love to watch anime. The factor behind this is they recall their middle school days or their personal life stories.

If we talk about why people like a certain anime character, then most probably the factor could be how they are looking, how much intriguing, or how much the badass anime character is.

Anime characters are a performance worth paying for on their own, whether they flawlessly compress all that one loves about a series into a personified form or simply steal the show. This list will be determining who truly is the coolest of the cool, as it runs down the Top 12 most popular characters in anime history, bringing things back to the glory days of that middle school lunchroom.


Sword Art Online has gained a lot of fan base in anime history. The reason behind it is the cast played its anime character so well, especially the character of Kirito made its fan base.

Kirito as a character is having a quiet attitude or is involved in various adventures in the videos and games, or even it is romance. He is ruling the anime world with his charisma and taking place in the heart of fans.


Talking about the anime Steins Gate, so it was a pivotal and influential kind of anime. Although the entire series is fantastic and worth watching, the anime character, Kurisu Makise, made it another place.

She is a great rapport and having a sweet side which helped her in taking compliments from the fans as well.

While being admirable, this added weight to the initial twist that she would die in the series. As the series progressed, fans’ feelings for Christina grew stronger, and they began to love and worry about her more and more.


Even after delays, My Teen Romantic Comedy SNAFU made its way to gain its popularity.

Hachiman Hikigaya is the only anime character from this series that gained popularity as being the king of self-depreciation.

Hachiman holds the attention of the audience due to his high school protagonist character, and viewers love watching the anime character.


Itachi Uchiha is considered one of the famous edge lords in the world of anime. But he couldn’t reach this place without the help of his younger brother Sasuke Uchiha.

The character of Itachi Uchiha is all about being a villain till half of Naruto Shippuden until his true story about the greatest sacrifice was revealed.

But the amazing part is this, even being a villain till half of the series, his story reveals the fandom loves him enormously.

The Sharingan eyes took the attention, and either it is his mysterious history or cool moves, Itachi made his millions of fans all over the world.


Planning to watch Hunter x Hunter, so the story has taken a new perspective giving a demonstration about how varied and magnificent Shonen is.

Killua Zoldyck is one of the characters from the series the tells how cool and varied the series is.

Although the series shows him as a Gon Freecess’ sidekick, he still managed to grab the attention of the audience due to his mysterious family history, lethal talent, and many other factors.


The list can’t be completed without Gintama. Gintama is considered the king of anime comedy and is famous due to his surreal humor, loveable characters, and the impossible number of references regarding pop culture.

What made Gin reach this list is his ability to make jokes having a straight face, and ecstatic straight man routine.

Moreover, the endearing, stoic lines and playing cool being as a fool or having a mastery while pretending like a hard-boiled badass make Gin the unique anime character in history.


Naruto epitomizes the phrase “starting at the bottom” since he began his adventure as an inept outcast of his ninja school. Only for fans to applaud and cry as they saw him work and scrape his way to the top, training with the most powerful ninjas while still finding time to look after his teammates.

The character of Naruto made his place in the heart of many anime fans as he provided some of the best anime fights along with character dramas and underdog stories.

Not only this, but he also made his way to the 7th Hokage of the Hidden Leaf Village, giving the readers and viewers feeling like proud parents.


Roronoa Zoro, the “Pirate Hunter” and first mate of the Straw-Hat pirates, join this list, proving that minor characters and seconds-in-command may be beloved.

Zoro started as a loudmouthed boy who believed that possessing more swords will show that he is strong. He’d go on to perfect the legendary three-sword style and evolve into the stoic badass that fans admire to this day with meticulous training and the aches of a lost rivalry.

Zoro has paved (or, in some cases, cut) a path of destruction in his quest to become the world’s best swordsman, leaving behind buildings, robots, and some of One Piece’s best enemies. He is the level-headed rock that has supported and directed Luffy as Captain of the Straw Hats, as well as a faithful ally who has demonstrated to fans what devotion truly means on multiple occasions.


Rintarou Okabe is considered the leader of the Future Gadget Research Establishment. He embodies everything a struggling college/STEM student should strive for.

Being a first-year student at Tokyo Denki University who’s decided to relocate his operations to Akihabara and start his time travel research lab, managing a team of engineers who are more otaku than scientific.

Rin draws viewers in with his eccentric and bizarre behavior. He captures the attention of the audience with his hidden levels of sincerity and intrigue as the series goes ahead deeper into mysteries. Rin is an anime character of a variety of high concept moral dilemmas that provide plenty of material for an already interesting character.


“Kira” Light Yagami, the youthful savior of humanity and punisher of everything wicked, follows in the same vein of high concept, moral issues, and suspense.

Light is a good-looking genius of high school, but cultural and familial expectations pushed him further away from the basic aspects of daily life until he started facing lifetime practically.

He was about to embark on a mission of world salvation and mass murder.

Light now can kill anybody, anywhere, by dictating their name and even cause of death within the Death Note, thanks to his discovery of the Death Note and his friendship with the Death God Ryuk.

Taking under the alias “Kira,” Light takes advantage of his newfound opportunity to execute all of the world’s worst criminals, bringing closure to some while sparking a global conspiracy/mystery for others. Light has led fans on one of anime’s greatest cat-and-mouse chases with his genius-level brain and unusual zeal.


Edward Elric, the protagonist of one of the best Shounen anime series of all time. He has provided viewers with an equal mix of feisty, underdog passion, and ethically tortured human drama. There is very few anime that can match this Shounen protagonist.

Edward Elric has taken fans on an incredibly magnificent journey of philosophical and religious drama, political intrigue, joyful friendships, and epic, high-concept alchemy battles. He performed an experiment that went bad and left him without an arm and his brother’s soul trapped in a suit of armor.

Despite his arrogant, loudmouthed demeanor, Edward Elric was the face of an adventure that anime fans all around the world were looking forward to.


Levi Ackerman, humanity’s strongest soldier as well as the Captain of the Scouting Legion division and the Special Operations Squad, is the next master of swords of a different kind.

Levi has gained more than just the fans’ adoration since his entrance; he’s also earned their respect since his role as the icy, stern-faced Captain scares to almost Fullmetal Jacket levels but is tempered.

Levi is a formidable warrior on the battleground, as he’s featured in some of the Attack on Titan’s most intense scenes fending against titans and other troops alike. Anyone who underestimates this man because of his small physique may soon find themselves on the receiving end of a sword.

In the anime universe, each character has a unique personality and appearance. Anime, as a bright and intricate kind of art, provides a unique viewpoint on the universe and the human mind’s potential for bringing the unreal to life through animation. In my extensive research on the anime universe.

Inspiring Video Marketing Examples Marketers Should Try Out in 2023

Thanksgiving Movies You Should Watch with Your Loved Ones in 2022