How To Make a 3D Animation? Everything You Need To Know 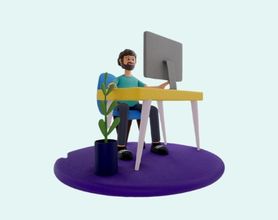 Eich Eyf
3D animation industry is booming massively. If you wish to become a successful 3D animator, this is the right time. Read our blog to learn how to make 3D animation.

Since childhood, we all have seen 3D animation. Sometimes in video games, movies, features, tv series, and advertisements.

It is an art genre that began in 1960s experimentation but did not become popular until the 1995 animated movie Toy Story was released.

Now, 3D animation has reached the pinnacles of success. It’s an omnipresent and ever-expanding animation art form that has made it a highly competitive industry, and it takes real guts to get into it and thrive.

If you’re willing to take the risk, give it a shot and make your career in it, the first thing you need to determine is how you’re going to do it – how to make 3D animation?

To help you out in this brief guide, we’ll walk you through the whole process of 3D animation step by step.

So, without any further ado, let’s get started!

How To Make 3D Animation – The Process

You must be familiar with the fact 3D animation is quite a technical art form, and the whole process of 3D animation is complex. Apart from having a specific skill set, it goes through various production stages.

Each stage is intricate in its own way. You need to have different skills and good creativity to make a 3D animation video.

Phew! The process of 3D animation production looks pretty complicated when you look at the breakdown of the process mentioned above.

But that’s just an overview. Let’s now take a closer look at each production stage to understand in-depth how to make a 3D animation.

This is where the whole animation process starts. Coming up with a concept is searching for a kickass idea or story for the piece.

The animation industry giants such as Pixar, Disney, and Illumination spend months developing compelling ideas for their pieces.

The secret of the success of these animation giants is they work thoroughly on their concept even before writing a single word. Unlike live-action films, if changes are made to narrative during the production process, it will blow the whole budget and create chaos.

So, when starting, work on your concepts properly. It’s a great idea to share it with someone whom you cannot trust on so it will be easier for you to determine whether the idea or storyline you’ve come up with will be successful or not.

It’s not that simple because when writing a script for a 3D animation video or film, you have to jot down each and every expression, dialogue, movement, and action.

People who encompass a creative flair find it easier to write gripping scripts. If you’re not good at writing, you always seek assistance from professional scriptwriters.

But if you want to do it yourself and looking for some guidance, then do give a read to a conclusive guide on scriptwriting for animated videos.


Having a robust plan is essential whether you’re making a simple explainer video or an animated film. One of the most significant parts of the planning stage is creating a storyboard for your video.

A storyboard is basically a graphic representation of how your animation will unfold, scene by scene. Storyboard I just the blueprint you create before building the structure.

A storyboard visually guides you throughout the 3D animation production process. Begin the process by creating blank slides and drawing each scene to show the video sequence.

There are plenty of storyboarding templates available on Google. After drawing the scene, add your script and then sketch your story.

You don’t have to go into details. Don’t worry if you’re not good at drawing because lousy drawing is better than no drawing.

If you don’t know how to create a storyboard, read our guide on creating a storyboard for a film.

3D modeling is one of the most integral parts of the 3D animation production process. 3D animators use the 3D modeling technique to breathe life into their ideas.

Every Hollywood Blockbuster uses this particular technique to add special effects, reduce cost, and speed up the film production process.

The popular HBO series, Game of Thrones uses a 3D modeling technique to mock every episode.

Basically, 3D modeling is a technique to create a 3D digital presentation of a character or an object. Animators use 3D modeling software to make a 3D model of their characters and objects. They use software like Spine,3D Max, 3D Maya, to name a few.

Once you have created the 3D representation of your objects and characters, it goes under the texturing process. Texturing is the process of making the outer layer of an object. It could be the clothing or skin, even hair of your animated characters; metallic polishing for a machine or car; whiskers of a cat, masonry of a house or a building, etc.

Texture artists are professional people who are involved in this stage of production.

The term rigging might sound a bit weird, especially to those who have just started exploring the 3D animation industry.

Primarily, rigging is constructing the skeletal and muscular base of your animation. The rigs of a character allow the moving parts and joints of the object to move realistically.

Character riggers are the experts who create the working skeletons of a 3D animation character.

The next production step is skinning. Skinning is the technique to smooth out all the joints and moving parts. You can consider it as giving skin to all the underneath mechanics to hide them.


Now comes the main part, animating your characters and objects. You have to animate them through a scene or sequence of moments.

This is the stage when your script and storyboard come into action. To begin, a layout must be decided by generating a set and populating it with items. Then, they must be animated by giving animation variables to objects and characters. Following that, models within the scene may be brought to life via motion capture and keyframing.

For animation, you can use different 3D animation software such as K-3D, Blender, Daz 3D, Wings 3D, to name a few.

Rendering, or picture synthesis, is the process through which a graphics processing unit generates a three-dimensional animation (GPU). This is accomplished by feeding the render equation into the software, which outputs an animated sequence in its entirety. Texture mapping, shaders, reflection, shadows, depth of field, transparency, and motion blur may all be formed into the sequence during this step.

Compositing is the process of combining many renders passes to create the final animation. It is a technique for fine-tuning features such as shading, lighting, and color by adding layers to a single or sequence of photographs.

Visual effects are applied in a similar fashion to compositing. The illusions and visual effects used to enhance the sceneries and characters are created as independent renderings and overlaid on top of the current animation using a compositing tool.

All of the animation’s audio parts are developed in a sound studio. This covers the recording of the score and all the necessary musical parts and embellishments for the animation. The music is synchronized with and complements the pictures.

Foley is the process of creating all the necessary sound effects for a composition. Once these audio pieces are complete, they are subjected to sound edit and mix to ensure they are in rhythm with the action.

Even though the animation is created after making a storyboard and strictly sticks to it, it still needs some edits to make it PERFECT!

It needs edits to cut unwanted scenes, time out all the scenes sequence by sequence, and alter the final sound effects.

Now when you have made a storyboard, animated it, rendered it, and made final edits, it’s time to do the rendering one last time. When you have completed the production process and have done the final polishing, you can add all the elements in the can for the final rendering.

Before hitting the button for final rendering, make sure you go through each and everything thoroughly because there’s no turning back.

After the final rendering is done, your 3D animation production process ends.

So, that’s how to make 3D animation. Now let’s talk about how to become a 3D animator and what it takes to become a successful one.

How start your career as a 3D animator?


Well, you must know becoming a successful and professional 3D animator is just like learning any profession. You first must understand that it’s not something you can accomplish in weeks, months, or even years. It’s a whole process that calls for a lot of dedication and a great deal of determination and love.

But if you have passion for it, it’s worth it.

You can start with making small animations and polish your animation skills.

You can hire people for different tasks such as scriptwriting or storyboarding. However, you should be a complete package to be a successful animator.

Be it writing a script, rendering your project, or making final edits; you should know how to do each and everything.

You can start by doing small experiments for self-learning. Once you have a good command on small and simple things, navigate your way through complex elements of this process.

Though it could be a little or maybe a lot more daunting, you need to push your boundaries to become a more sophisticated animator if you really want to be successful.

Also, it’s a good idea to make a professional portfolio that you can pitch to your client. For this, you’ll need formal guidance and training, but it will be really beneficial for you in the long run.

All set to make your own 3D animation from scratch?

All things considered, 3D animation seems to be a pretty daunting artform. The whole process of 3D animation production calls for a lot of effort, time, and patience.

If you have the devotion to become a 3D animator and have the courage, nothing can stop you from reaching the pinnacles.

Remember, the 3D animation industry is expanding, and becoming a 3D animator can bring you great fortune, so make your decision wisely.