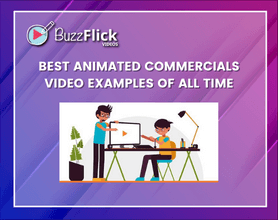 Are you thinking about how to improve your brand’s image and online presence? Do you want to introduce your brand and its offerings most intriguingly and engagingly? Creative animated commercial videos can motivate you to create something more incredible and novel.

If you take a look, you’ll realize most global brands have chosen animated commercials as a great option to advertise their valuable offerings unpretentiously in the market. It’s one of the best options to pique the audience’s interest.

Let’s explore the most beautiful, creative, and enthralling animated commercial videos produced for and by some of the most significant companies of all time.

What is an Animated Video Commercial?

Before we get into the details, let’s first answer the most common question people who’re new in this industry often ask – what is a commercial video?

Primarily, a commercial video is produced to promote a brand, company, or any particular offerings (product or service). Commercial videos are often aired on television, shared on social media channels, and other promotional websites.

This innovative idea drastically brought a revolution in the commercial industry. From that day, animated commercial popularity grew massively.

To put it in simple words, an animated commercial is just like a standard commercial short video that provides information on a product or service. The only difference between the two is animated commercials have a captivating storyline with amusing characters, polished voiceover, charismatic background music that can pull anyone’s heartstrings.

Undoubtedly, such video commercials are pretty enticing, and they can easily persuade the audience to make a purchase.

As we know, there’re endless possibilities when it comes to commercial video animation, and with the rise of animated commercial videos, you may find hundreds of thousands of examples.

Here we’ve listed some of the best animated commercial videos you can take inspiration from.

So, without any further ado, let’s take a look at them.

#1) Nespresso On Ice: You’re Just A Sip Away


In 2017, Nespresso released a 30-second animated commercial to promote their ice blends (limited edition). The calmness of the commercial took our breath away and gave us the refreshing taste of their limited edition iced coffee.

The well-chosen sound effects and soothing background music get us to drown in the serenity of the pulchritudinous animation. The choice of eliminating the voiceover is a great idea.

This comical 39-second commercial video features a Cadbury egg (in a graveyard) that jumps on the bandwagon of the zombie apocalypse. This humorous commercial is captivating enough to capture the audience’s attention and motivates them to try out the limited edition Screme eggs on Halloween.

The storyline used in the commercial is often found in classical novels can be pretty facilitating to promote limited-edition products.

Moreover, this animated video commercial has received more than 200K views on YouTube.


Every Gen-Z kid remembers this classical commercial because of its beautiful lyrics and catchy tune.

Oreo released this fantastic commercial back in 2013. Adults were surprisingly the target audience.

Oreo wanted to convey a beautiful message to all the adults, “Wonderfilled captures the universal human feeling that kids are naturally so good at, yet adults need to be reminded of: a sense of wonder in the world.”

The commercial signifies, using a festive and yearning theme works for an animated commercial is an excellent idea as it let consumers to connect and relate to the concept.

#4) Android: Be Together, Not The Same


This simple-looking ad has a profound and thought-provoking message. In 2016, this animated commercial video uses “rock, paper, and scissors” to depict an important cause – bullying.

The ad showed how the “three” didn’t fight each other in the cutest way possible. They did not let their differences interfere and chose to be friends. Released by Google for its Android OS, the company wanted to show an inspiring tale – representing their core values.

Advertisers can learn from this ad and use “social issues” to an advantage. It’s not always necessarily important to market the product firsthand, as you can capture your customers’ attention even without doing that explicitly.


Food delivery apps are the norm these days, and the commercials released lately have been, well, mediocre. That’s not the case with Swiggy, though.

This app released a short-animated video showing a fast-paced environment and what difficulties riders face every day. Swiggy showed how despite the obstacles they face, they are as resilient as ever in their pursuit of offering an excellent service.

Furthermore, the brand focused on its signature features, letting consumers know why Swiggy is the best option. Marketers should learn this app’s strategy and focus on showcasing their product’s features. A lot of times, that’s all you need.


Airbnb didn’t use any inspiring voiceover but instead showed a series of illustrations in just 30-seconds! Since they wanted to advertise “cycling,” the video’s transition looked like someone traveling on a cycle as well.

Airbnb knew they had less time. That’s why they showed illustrations and stats about bicycles right after it. You should note how Airbnb depicted its message without seeming vague.

But showing stats isn’t effective a lot of time. It depends on the nature of your product. If there’s a ton of facts related to a product, use them in commercials. It’s better than to try to sell something blatantly.

#7) MasterCard: By The Numbers


Mastercard is used by basically every other person and is one of the most well-known credit card providers out there. So why do they bother spending millions on advertising?

Well, Mastercard uses a different strategy. They don’t try “selling” their product. But instead, showcase what the card means – using stats and features. That’s precisely what “by the numbers” shows.

In a minute, the infomercial graphics showed Mastercard’s pride, i.e., how the card is used worldwide and in many different ways.

The key takeaway here? Remember how Mastercard emphasized building a presence and then capitalizing on it rather than just promoting their product.


WhatsApp’s security features have been criticized a lot over the years. User growth had stopped because of that. To combat this, WhatsApp released an “end-to-end encryption” feature – assuring utmost security.

To advertise their latest feature, the app straight-up showed this feature in a 30-second ad. The ad portrayed how a lady shared her location with a loved one, without worrying about the app invading her privacy in such a short time. She knew that WhatsApp was by her side in such a challenging time.

From a marketing perspective, this video ad serves as a reminder to add an emotional aspect to an advertisement to make it more effective. Humans react to it; it’s natural. Bland facts don’t attract anyone.


Coachacademy has a millennial target audience, and obviously, no one’s going through more problems than this generation. Stress, mundane issues, and lack of optimism – all these deteriorate mental health. Coachacademy wants to help them, advising them on how to live a better life.

So, in the commercial, Coachacademy showed related scenarios. Using a short 2D animation, the ad had a lot of illustrations and a soothing voiceover. Using facts and motivational quotes, they tried convincing people.

Positive energy permeates the video, making it easy for the audience to get into a good mood watching it. There is a lot to like about the animation. It effectively communicates the essence of Aspiration’s offerings and encourages viewers to consider their financial future in new ways.

What surprised the audience most was the amusing character of the living dollar.

Using a combination of 2D and 3D approaches, the outcome is a stunning display of mimicry and movement.

#11) Wimbledon: In Pursuit Of Greatness


This commercial brilliantly showcases the history of the prestigious tournament in a mere minute. The animated ad was released in 2018 and captured every tennis fan’s heart. Everyone can relate to it, no matter what generation they belong to.

The advertising agency used legendary players to an advantage. By showing reflective elements, they invoked people’s memories. It’s a significant takeaway from this commercial.

More so, the illustrations shown are beyond exceptional. Also, the background music acted as an icing on the cake. Combining all these, they didn’t need a voiceover. Such graphics were enough to make people remember the event as well as the ad.

#12) Heinz Beans – Can Size for Every Aussie


For every Aussie, beans are an afterthought. They are neither extravagance nor fine dining; they’re ordinary and inexpensive food to satisfy one’s hunger.

However, the food company Heinz’s animated promotional film is a sight to behold. They’ve put up a short film to show the wide range of product sizes they offer.

Think how uninteresting this issue is, yet they know that customers like variety and don’t want a one-size-fits-all solution.

As a result, they concocted a love story and a tale of personal triumph for the main character. Beans are a part of everyday life and can be enjoyed by people of all ages, which is why it works so well on so many levels.

This cute little narrative is brought to life in a meaningful way that everybody can understand thanks to the animation. “Up” has a similar feel and aesthetic to this film, which is a joy to watch on the big screen.

Why should you use animated commercial videos?

So, that’s our best 12 rundowns of visually striking and engaging animated commercial videos.

The video commercials we have added to this list demonstrate why animated commercial videos are thought-provoking, compelling, engaging, memorable, effective, fun, and even touching.

All of these animated commercial videos are enjoyable and light-hearted to watch.

Need an animated commercial video maker for your business? Consider BuzzFlick – a video animation agency with an extensive and experienced team of creators who can create innovative and engaging animated videos.