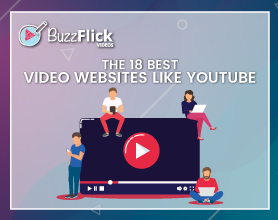 Sophiea Ank
Best video hosting and streaming sites for you and learn more about the 18 best video websites like YouTube.

While talking about online video websites, what name does hit your mind? YouTube is the name!

Undoubtedly, YouTube is the most viewed online video website and application, and it is popular among all age groups.

YouTube has always been the best choice for online video surfing, but many other sites have some distinctive features and strengths.

Video content creators, business owners, and brand managers should know about these alternatives for brand awareness and business boosting.

We have short-listed 18 amazing online video websites similar to YouTube. These websites aren’t just good for business but also best to watch videos on.

So, without any further ado, let’s jump straight to it!

This blog aspires to shed light on the websites that are quite alike to YouTube, especially those with a user-friendly interface, more sharing options, downloading options, and affordable price plans.

In the last few years, one of the strongest competitors of YouTube is Instagram TV. This is very popular among social media influencers and content creators.

The IGTV is easy to use due to the uploading of videos through the phone. Unlike Youtube, IGTV doesn’t need a computer, and it is tailored for mobile phone users only.

IGTV is best for content creators and lets them showcase their work to a larger audience. Users can view IGTV videos through accounts they follow or by searching for them.

The future of the video lies in mobile phones, and IGTV can be the next YouTube in coming years.

TikTok is not a website but attracts more viewers than YouTube. In the last four years, TikTok has become very popular and holds the position as the rapidly growing video content creating platform.

Users lip-sync the audio to create different genres of videos. TikTok has made many celebrities and social media influencers. And they are inspiring more to adopt to gain popularity and earn money.

TikTok is a Chinese app that has done its business in over 150 different markets with almost 75 languages. It has been declared to be the 7th most downloaded app in the last ten years.

Vimeo is the second popular online video website amongst content creators and video makers. It is rich in audience engagement and known for its quality content.

Vimeo encourages the artist to showcase their professional quality work on the website. Most of the filmmakers use Vimeo for uploading their content.

You can find the most interesting content over Vimeo, and it has numerous content for people who are more into filmmaking and videography.

If you really want to challenge your capabilities and want to make a mark among competitors, then Vimeo is the best solution for you.

Dailymotion has an almost similar interface like YouTube. You can find the videos on the homepage and more in the search bar or category section.

Due to flexibility, the website has almost 112 million visitors traffic per month. Moreover, it let the content creator earn money through video by placing ads and paywall.

Netflix is the biggest video and series streaming service that produces its own content through production and direction.

The platform allows the user to create an account with five sharing at a very minimal cost and stream the favorite series, movies, and documentaries anytime, anywhere.

Netflix suggests the content through reviewing the past search, watched, and wish list. This has the most user-friendly interface and upgrading it day by day.

Netflix has won awards due to its remarkable series, quality direction, and extraordinary production. It’s not just popular due to its visual content but also audio and broadcast content.

Another famous video website for its distribution and production of on-demand series, movies, and documentaries is Hulu.

Hulu has a Hulu LiveTV service, which lets users enjoy the television content transmitted through the internet (IPTV).

The Walt Disney Company majorly owns Hulu but provides the content to their audience from other television networks too.

Hulu is more like the combination of YouTube and Netflix; they are OTT video streaming websites and have many more similarities.

It is the most economical site and has the most affordable price plans compared to HBO, Netflix, and Prime Video.

Disney+ is a new OTT video streaming website and has gained popularity among the audience as a long-established platform. Almost 10 million users have subscribed Disney+ service on the first day of launch. Now imagine its worth as the streaming video website.

The website is owned by the Walt Disney Company and offers other production companies and famous franchises like Pixar, Marvel, Star Wars, Nat Geo, ABC, and Fox Network to stream their movies and series.

Disney+ has its own production line of movies and series that stream on the website. They create the hype of promotion, and WandaVision is a living example of it.

TED is an online video website owned by the award-winning TED Foundation. It has an interface similar to YouTube, but its contents are primarily educational and awareness-raising.

TED talk is a free online video platform, but some content is restricted to exclusive members.

The membership allows the users to enjoy the restricted TED talk video and discuss it in the chat group with a bunch of people. In addition, the membership fee is used as a donation to the various welfare projects.

TED talk also has channels on YouTube as TED Talks, TED-Ed, and TED Ex, which let users have an option to watch videos on the TED website or on Youtube.

The website streams its original series, movies, documentaries, and content from the other production studios and film franchises.

The Discovery Channel launched curiosity Streams, so it comes under the umbrella of DNA. You can count it among the other video streaming platforms like YouTube TV, Apple TV, and Prime Videos.

Veoh is an online video website that hosts user videos and offers US television & movie production studios to stream their shows and movies.

You can stream the videos, shows, series, and movies in full length by just installing the Veoh Web Player.

In 2008, Vevo was established by one of the biggest record companies. Vevo is an online entertaining video website that mainly streams music videos.

The website does not have any separate fame and is soon about to get shut down, but it is still one of the best online video websites dedicated to the music genre.

One of the eldest online video websites and providing its services since 2004. Brightcove serves a variety of video management tools for business promotion and allows the business to manage its marketing strategy efficiently.

Brightcove allows you to edit a video, upload it, and monitor its performance on different channels. Brightcove is not just a video hosting site but also a communication hub for companies.

Fact: Brightcove claims to be the fastest video streaming web player as compared to others.

If we are talking about Netflix, Hulu, and Disney+, how can we forget about Amazon Prime Video – an online video streaming website with high-quality services.

Amazon Prime Video is more like Netflix but a little more expensive. Still, it is the best video streaming website for entertainment and quality time.

Dtube is a decentralized video platform where users can interact with each other in a very secure and protective environment.

Users feel ownership over their content and video. Dtube lets the user to handle and control all the activity on their channel. It does not ban any content and let the videos remain on the website forever.

Users can earn rewards in the form of Dtube Currency through uploading, posting, and voting on the video content.

PeerTube is a peer-to-peer software platform where users design an instance (a server) for specific users and content. Technically skilled hosts can operate the server.

If you prefer brief video content as compared to long and tedious videos, then Metacafe is the website you can bookmark on your browser.

Metacafe is one of the oldest video hosting websites, even older than YouTube. The website has a specialty in the short video clip of around 90 seconds.

The site is famous for its training videos, reviews, and other entertaining content. Metacafe’s non-professional look makes it user-friendly for its users.

the site has content related to every category, but most of them are GIFs and funny memes. 9Gag is considered as the founder of GIFs and memes.

If you are an online gamer and stream your gameplay live, then Twitch is the website for you.

Twitch is the video streaming website that only streams live gameplay and eSport tournaments. It serves the gaming events like E-Sports World Convention and World Cyber Games.

Twitch is an ad-free video hosting platform and lets you host a channel and live stream your game. Additionally, you can review others’ gameplay and build a gaming community.

Gamers can review the comment of the other users on their live-streaming comment section, and users can also interact with each other.

Who can be a Competitor to YouTube in the future?

All the mentioned above video sites are remarkably excellent, but some of them can give YouTube a tough time in the future. Like:

YouTube is a strong platform itself, but the growth of other websites can de-rank it soon.

It all depends on your need and goal, but check out these best options that you can choose over YouTube:

Hopefully, you have found this blog informative and helpful.

If you want to create some amazing video content with a professional touch, then you can seek the help of BuzzFlick – a master video animation agency.

The studio has been providing its award-winning 2d animation services all around the world. Its expert animators are best in video animation, 2D & 3D animation, video editing, motion graphics, and whiteboard animation.