Animation Principles: Straight Ahead And Pose To Pose 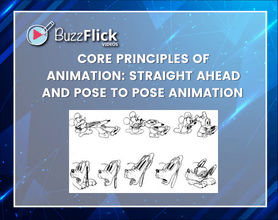 Eich Eyf
To understand the language of animation is essential to learn about the principles of animation. Read to explore the 4th principle - Straight Ahead and Pose to Pose.

The 12 Principles of Animation – these are fundamental building blocks with which every animator should be acquainted.

The animation itself is a complex language, and to understand it, 9it’s necessary to get the hang of these basics. In the book The Illusion of Life, the two-key animators of Disney, Frank Thomas, and Ollie Johnston, introduced these 12 principles.

Since then, these 12 guiding principles have maintained the de facto standard for aspiring and veteran animators alike.

Among these twelve principles, the fourth animation principle, Straight Ahead Action and Pose to Pose, hints at how to approach animation.

On the face of it, it seems like two unique ideas, as if two animators tried them out and chose to animate in different ways. Many various ideologies have permeated the art world for ages, and this concept covers all of them in its scope – classicism vs. romanticism, structure vs. spontaneity, id vs. ego, to name a few.

Origin of The Principles of Animation

Ollie Johnston and Frank Thomas, in the book ‘Disney Animation: The Illusion of Life’ defined straight ahead and pose to pose animation.

They define straight ahead as,

“Straight ahead animation starts at the first drawing and works drawing to drawing to the end of a scene. You can lose size, volume, and proportions with this method, but it does have spontaneity and freshness. Fast, wild action scenes are done this way.”

While on the other hand, they defined pose-to-pose technique as:

“Pose to Pose is more planned out and charted with key drawings done at intervals throughout the scene. Size, volumes, and proportions are controlled better this way, as is the action.”

The principal animator delegated other pose-to-pose animation to someone else – an assistant.

Taking help from an assistant helps the animator avoid having to sketch every single drawing in a scene.

This method allows an animator to work on a larger number of scenes while still focusing on the design of the animation.

It’s worth noting that both The Illusion of Life and a handout prepared around the same time by fellow Disney animator Eric Larson indicates that Disney’s approach to this subject was often a combination of the two ways. That implies you’d get the best of both worlds, but you’d also have some drawbacks.

Straight Ahead vs Pose-to-Pose Technique


To put it simply, these are two different techniques to animate an action.

The straight-ahead technique means to animate your action from drawing 1 to the end in sequence order.

Whereas the pose-to-pose technique is a bit more intricate as it means to draw the key poses first (often the beginning and end drawing of the action and some other key moment between. Once the key poses are done, the breakdown and in-between drawings are added to fill the rest of the animation.

The straight-ahead approach entails animating your motion in sequence order from drawing 1 to the end.

On the other hand, the pose-to-pose approach is more intricate since it requires drawing the essential poses first (typically the beginning and conclusion of the motion and any other key moments in between). After completing the primary poses, the breakdown and in-between drawings are added to fill out the rest of the animation.

Elements and fluids like water and smoke are often animated using a straight-ahead technique.

Some actions require tight structure and timings, so such animations are created using the pose-to-pose technique.

This animation principle helps to preserve the volume as well as maintain a robust structure.

When using the straight-ahead method, it becomes intricate to reckon where and how the created action will end.

Keyframes are important poses in a character’s action, such as the initial and end positions. All the drawings drawn between the keyframes are known as in-betweens. Moving the action between keyframes is what they do.

Adding additional drawings between keyframes slows down the motion. 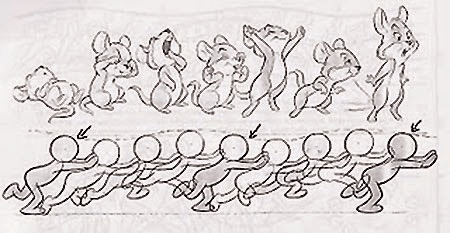 Straight Ahead and Pose-to-Pose: Pros and Cons

Both techniques are very unique in nature and are widely used by animators across the globe. However, each of them has its own set of pros and cons.

Let’s take a look at them. Shall we?

The flow within the animation is quite natural, and it offers room for creativity and improvisation. With this animation technique, animators can show spontaneous thoughts about their stories.

However, this process is time-consuming and costly because the objects and characters’ sizes are not consistent.

The structure of this method is more planned and structured. Plus, it gives more clarity to the animation. When using this technique, it becomes much easier to keep a close eye on timings.

Regrettably, the working approach lacks flow since you will continually be looking within key frames.

We hope you’ve relished the interpretation of the 4th animation principle – Straight Ahead and Pose to Pose animation.

If you want to learn about other core principles of animation, go ahead and check out – Disney’s 12 Principles of Animation.

Moreover, if you’re searching for a creative team of animators, consider the innovative team of BuzzFlick consisting of multi-discipline animators and designers.