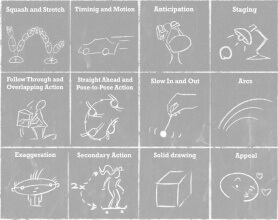 admin
Learn Disney 12 principles of animation that will help you in making the best animation video and you can easily gain the targeted audience for your business.

You can’t deny the existence of Disney from the history and facts about animation. The reason behind this is that Disney played a vital role in the field of animation. Telling about the animation tips- do’ and don’ts it gives us the 12 principles of animation.

The Disney 12 principles of animation were first introduced by the great animators Ollie Johnston and Frank Thomas in the Ollie Johnston The Illusion of Life: Disney Animation which was published in 1981.

After studying the work of Disney, they landed to write a complete book from the 1930s onwards that depicts the 12 principles of animation.

When we are talking about the 12 principles of animation so the squash and stretch are considered as the most important ones. If you are looking to add gravity, mass, weight, and flexibility to your animated character and objects then squash and stretch is the best application for it.

For instance, take the example of a rubber ball that is tossed in the air. When the ball travels up it stretches and in the downward movement squishes when it’s time to hit the ground.

You must keep the object volume consistent. Whenever you try to stretch something, it becomes thinner as the stretch increases, and when you squash something, it needs to get wider.

The anticipation plays a unique role where it helps the viewer to get the idea of exactly what is going to happen in the next second.

So, if you are planning to apply this effect it helps in giving the object a more realistic action.

Let’s take an example that you are trying to jump in without bending your knees, or even throwing a ball without pulling the first arm back.

It will seem to look very unnatural because it is not possible that you can easily jump without bending your knees and or throwing the ball without pulling the first arm back.

So, just think once that if you are making an animation video and not adding a flicker of anticipation in it so it will make your motion seem awkward and lifeless.

In artwork, staging plays a vital part because it helps in giving life to the animation. The staging grabs the attention of the audience and draws importance towards what is important within the scene.

It is better that you keep the focus within the scene and if there is anything less important so, the motion of the thing builds priority to the certain object.

#4) Straight Ahead Action and Pose to Pose

For handling the drawing animation there are two best approaches: straight ahead and pose to pose.

The benefits of each of the two approaches are different but most of the time they are combines together to get a better result in an animation.

In the pose-to-pose technique, you draw the beginning frame and the end frame, and some of the keyframes that are in between. Once you are done you go back and complete the remaining ones.

The straight-ahead action and pose to pose technique help you in giving a bit of control within the scene and also allows increasing the dramatic effect in the motion.

Sometimes you see that when an object is in motion it suddenly becomes standstill. The parts of the object stop at different rates.

If the animation is done across the scene so the arms and legs may be moving at different time intervals as compared to their head. This is known as overlapping action.

Similarly, when they stop running, the hairs will continue moving due to the few frames that were added, and then they will come to rest. This is known as a follow-through. The follow-through and overlapping action are considered the most important principle if you want that your animation looks realistic.

The way to understand the concept of slow in and slow out is to take the example of a car. When a car starts and stops. The car will start moving slowly and then it will gain momentum and speed up afterward.

The action will happen in the backward motion when you stop the car by applying brakes. To add these effects, it can be easily achieved by adding more frames on the beginning and end of the sequence that is specifically made on the action.

To add more life to the objects you need to apply this principle to make a better animation video.

While working on the animation you must keep in focus the laws of physics. Take an object and follow the arc or a path while moving. Your animation should follow that arc so that you may obtain a good result.

Take the example of a ball and toss it in the air, it will make a natural arc as the gravity of Earth attracts it downward towards the ground.

For building support for the main action that is going within a scene you need to use the secondary actions.

The secondary actions help in adding the dimensions to the characters and objects.  For example, see the subtle movement of the character’s hair when it is walking or even the facial expression or a secondary object that is connected with the first object. It doesn’t matter what case it is but secondary action helps in creating a distraction from the primary one.

We need to return to the principles of physics for this animation concept, and use what we see in the natural world in our animations. The emphasis in this situation is on timing.

The effect won’t be believable if you move an object faster or slower than it would naturally move in the real world. You can manage the mood and behavior of your people and objects by using the right time. That’s not to say you can’t push things a little (especially if you’re making up a world), but if you do, stick to it.

Realism in a limit in animation makes it attractive for the audience else too much realism will cause it to appear static and even boring.

For making the object more dynamic add some exaggeration in the character. Create ways that push away the limits and pop your animation.

You must learn the basics of drawing. The knowing includes that how you can draw in three-dimensional space and also in anatomy, weight, volume, light, and shadows.

When you are pushing limits here you need to be consistent as well. If the animation has wonky doors and warped perspective maintain that perspective throughout the animation. Otherwise, the thing will get scattered.

The characters must be designed in such a way that it appeals the viewers. For this, you need to obtain an easy-to-read design, solid drawing, and a personality.

Although there are different animation styles you need to see the importance of appeal as well. This helps in building the character development and helps in telling the story through the art of animations.

Last But Not The Least

Hope so the 12 principles of animation that are done in Disney Studio helps in building a better understanding of the animation and If you are looking for 2d animation services then BuzzFlick can be your one-stop-shop solution.

Here at BuzzFlick, you will find a complete platform for 2D animation and we follow all the steps of the animated process flow that helps in creating a stunning animated video and quality work within the time.