The History And Facts About Animation 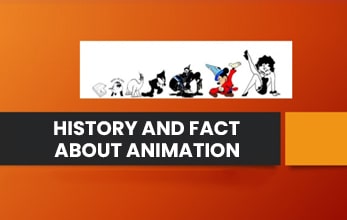 Mudassir Jafree
Here is an overview of the history of animation and the 14 interesting facts about animations for animation lovers, Enhance your animation knowledge instantly.

Animations have been around for more than a century now. Today, with a little research on Google, we can easily compile an overview of the historical animations facts and determine where it all started.

Animations were created to invoke emotions and entertain the audience. They were designed to be a new and more effective medium of storytelling.

The first-ever animation was created by a French cartoonist Émile Cohl. He named it Fantasmagorie (1908). The one-minute and seventeen seconds video laid the foundation of animations.

Check out the first-ever animated video below;

The first animations were just a start and the evolution of animation technology continued and as the technology progressed so did the possibility of what could be achieved through animations.

So, since we’re always covering the ultra-modern animations and their interesting facts all the time today, we’re going to do something different. This time, we’re going to list down the historical facts about animations.

We’re going to explore the fascinating roots of animations. And by the end of the blog, you’ll be amazed that animations are so much more than just moving cartoons.

So, without any further ado – let’s start discussing some interesting facts about animations.

How Old Animations Really Are?

People of ancient times were smart. No, really, they were ‘smart,’ specially the Egyptians. These people understood the importance of moving images and started creating illusions of a motion picture.

Did you know that the above image belongs to a  5,200 years old pottery discovered in Iran that actually had a series of images that depicted a moving goat?

Additionally, take a look at the images below from an Egyptian mural showcasing a wrestling match through a series of images:

This pictorial representation of a wrestling match is taken from Beni Hasan’s 15th tomb, and it is thousands of years old. The point is that animations are way older than you can imagine. Nobody knew these interesting facts about animations until the truth was uncovered.

The Early Adaptors of Animation

Fast forward to the 19th century, many pioneers of the animation world started adapting animation technology to create films.

The most notable and influential example among these short-animated clips became “Gertie The Dinosaur (1914),” directed by Winsor McCay. This animated film also became the first-ever animated movie to be commercially profitable.

Here’s a preview of the movie;

With the history of animation out of the way, let us tell you about some of the most intuitive animation facts.

We researched and extracted the most interesting animation facts that’ll make you reimagine some of the most iconic animated movies and their facts.

These facts about animation are more like the turning points in the history of the animation world and represent all the animations we have till now.

Without inspiration from Walt Disney, John Lasseter, Max Fleischer, and several others, the animation world would never have prospered as it did.

Moreover, there are several other questions that pop up in mind whenever an individual dives into the world of animations. So, here are some of the frequently asked questions and their precise answers.

What was the very first animation?

The first-ever animated film was “Fantasmagorie,” and it was released on 17 August 1908. The film consisted of moving imagery and gave people the experience of watching a real movie. The movie also had the traditional hand-drawn animation style.

Who is the most famous animator?

Who is the father of animation?

A French animator, “Émile Cohl,” is often called the father of animation. It is rumored that in 1907, Cohl was walking down a street when he saw a movie poster that was stolen from his comic strips.

What are the types of animations?

There are several types of animations; however, the most common ones are:

A Japanese man “Tezuka Osamu” invented anime. Tezuka Osamu was born on 3 November 1928, and he passed away on 9 February 1989. He was an artist, animator, and cartoonist.

Who gave the principle of animation?

The 12 principles of animation were introduced by two animators, “Ollie Johnston and Frank Thomas.” The principles are mentioned in their book “The Illusion of Life: Disney Animation.” The book was released back in 1981.

What was the first cartoon character?

The first cartoon character was “Mickey Mouse,” and he was created in 1927.

Why do cartoons have 4 fingers?

To put it simply, a four-fingered hand is much easier to draw than a five-fingered hand. This is the most probable reason why several cartoons have four fingers.

How fast do animators draw?

An animator with an experience of 15 years is capable of drawing 100 frames per day. The faster an animator, the faster he/she will churn out the frames. This would lead to quicker production of animation.

What is realistic animatronics called?

Building realistic humanoid robots by combining robotics with animation software is called animatronics. Mesmer Animatronics is a tool that is designed to create lifelike depictions of humanoid characters.

Who is the oldest Disney character?

Pete is said to be the oldest Disney character, older than even Mickey Mouse. Pete is the oldest because he debuted 3 years earlier than Mickey Mouse in the cartoon “Alice Solves the Puzzle (1925).”

Generally, it is the innovation and fascinating visuals that make an animation unique. Animations should be engaging and funny. The characters should be meaningful and intuitive. The presentation should have a happy or purposeful demeanor. These are just some of the reason that in our perspective makes an animation compelling.

An animation enthusiast who loves to research and describe animation strategies, animation services, videos, and software that help in enriching marketing. His passion for animation motivates him to write about video animation. He loves to watch animated movies in his spare time.