Video Transition Ideas that are Ideal for Your Business 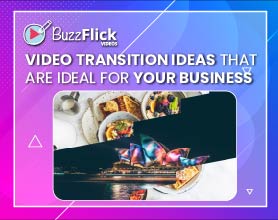 Sophiea Ank
A post-production process of video editing to combine footage with the effect of changing scenes is known as video transition. Check the best video transition ideas.

Do you want to create a video or movie by merging different clips?

It would be best to try video transition, and this blog will help you out with ideas, concepts, and all the answers you are looking for.

What is Video Transition?

A post-production process of video or film editing to combine or merge footage with the effect of changing scenes is known as video transition. It is the shift from one scene to the other, with special effects.

You can use video transition for:

Filmmakers use video transition when they want to switch the story, change the mood, or time travel (present to then or future to now).

8 Video Transition That You Can Use

In film post-production, the 8 awesome transitions are used to add effect for video enhancement. You can also experiment with these transitions in your videos.

Check out the 8 best video transitions you can try.

The fade in and fade out is the most basic transition that one can use. You have seen when the first scene turns one color (either black or white) and slowly merges into the second scene, which is called fade transition.

In the color fade in & out transitions are used to add dramatic effect of the time change. The black fading adds the emotional transition to enter another scene and create a dramatic atmosphere. The black fade-out is used at the end scene or for credits at the ending of the movie or documentary.


The white fading is used to add the memory flashback, dream scene, or in the scene of hope. This adds more of the visionary look to the scene, like the video down below.

Movie tailors, campaign ads, and memory videos use the fade transition to show all the scenes in one small teaser. Fade-in happens at the beginning of the teaser and fade-out at the end.


It was trendy in old Hollywood cinema, but it can now only be seen in documentaries or tour videos. Match dissolve is used in videos these days, where the scene changes with similar shapes are dissolving into one another.

i.e., like a golf ball is fading into the moon and changing in the scene with matching the size and positions of the objects on the screen.

The best example of zoom-in and zoom-out transition is a vlog video and drone shots. LeAw created a vlog teaser using zoom-in transition, which is a brilliant way to give an attractive look to the viewers.


Now check this zoom cuts video from the Shaun of The Dead, where Edgar Wright’s scene shows zoom-in clips of his routine. Fun to watch and interesting to learn.

A fast blur by the motion of the camera is known as whip pan transition.

The movie director, Paul Thomas, used whip pan in his movies very frequently. It is not just the change of scenes but also the changes different angles in one single shot.

Mostly comedy or action movies use this transition to add effects to the scene. Check out this whip pan compilation video from Paul Thomas Anderson’s films.

A slower transition than whip pan is wipes transition, where a shot moves from one angle/side of the frame to the other to start the next scene.

Wipes are used in the clips where the switching of the storyline in different locations is taking place for maintaining the connection.

This video from Star Wars is the perfect example of wipes transition – a great movie trilogy with incredible effects.

You must have swiped pictures on Instagram or Tinder, this transition is very similar to that.

In swipe transition, the scene and clips are swiped with the next one. If you create a product demo video, service demonstration, or software demo, then this transition is the best way to showcase all the features.

This video has demonstrated tips to become a vlogger using swipe transition, check this out.

Spin transition is used to create a spin or twist effect and begin the next scene. This is the most exciting video transition so far.

You can use the spin transition to switch the clips or images and add a fast precap of the video or information.

The early 8 seconds are the perfect example of spin transition in this video, but you can watch the whole video to learn more about rotation or spin transition.

To add artistic effect to the video, brush effect transitions are used. The movie and anime makers use this transition to add the impact of blood shed or paint brush stroke. This is a creative and fun way to add creativity to your video or movie.

The video below is the quickest example of the brush effect transition.

Before starting your video transition project, keep the following tips in mind:

If you want a professional post-production service, you can hire BuzzFlick – one of the best video animation production companies. The studio has a team of skilled animators, editors, creative heads & directors, and videographers and has expertise in explainer videos, whiteboard animation, video editing services, 2D & 3D animation, and videography services.