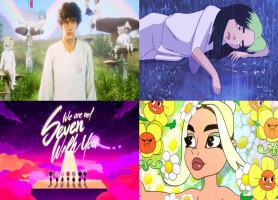 Eich Eyf
If you are a lover of Animated Music Videos, then check out our blog as we are bringing some of the best-animated music videos examples you must watch.

While animated music videos sound like a newly found concept, it has been buzzing around in the market for quite a while now.

Nowadays, after the pandemic broke out and almost every industry massively suffered so have music production houses.

Due to social distances, many popular artists preferred to look for a new format to create their music videos and stay on track. That’s where animated videos came to the rescue.

Most music artists make use of this startling technology. They animated their music videos and won the heart of their audience.

Not because their animated music videos were awesome but they follow the health protocols, after all, the production of animated video is much less of a hassle in these hard times.

So, without any further ado, let’s jump to take a look at the best music animated videos of all time!

If you go through the animated music videos of Dua Lipa, you will find extensive animation output that proves that why she loves music animations. It is observed that Dua Lipa explores several wealth styles, which makes her videos worth watching.

Recently, Dua Lipa released Hallucinate based on a cartoon reimaging the “70s dance culture”. The video consists of interesting trippy images that are full of rainbows which makes it fascinating to watch.

Focusing on the Black Community, Stormzy created a video in 2020 named “Superheroes”. This video is a piece of art in the field of music animation which depicts the idea of real-life heroes hidden among us.

Stormzy acted as a young superhero.

He looks around him and soaks up the power of everyday heroes that will help him become one of the superheroes one day. Watching the animated music video will find an exciting and attractive color palette sending a profound message.

When you see the video’s thumbnail, you might get confused between the band name and the thumbnail. The thumbnail isn’t adorable and doesn’t even explain the Rainbow Kitten Surprise(boo).

This animated short music video fits perfectly with the song. The video is animated and directed by Anthony Francisco Schepperd.

The start of the video consists of dark having a build-up to the execution leading towards the psychedelic freak-out end.

Daphne and Celeste are well-known for their production of catchy and bratty singles like Ooh Stick You! And U.G.L.Y. In 2000 at the Reading Festival, the band got bottled by the furious crowd.

Recently, director Dan Hett created the re-recording of one of the best song versions in the Japanese style from the album (Sunny Day). In the video, the duo is shown as the two anime characters drawn as imaginary with excellent looks and arcade dancing.

John Grant is an Icelandic singer as well as a songwriter who is a great tuner. The song “He’s Got His Mother’s Hips” is one of the best examples of having a thumping slab with wry electroclash designed with a complete music animated video.

The animated video is the work of two Cardiff-based animators, Casey and Ewan, who looped themselves with more than 11 animators to create this fantastic animated video.

In this video, the results are bewildering, having a lightning-paced mash-up, and John Grant is shown in the cartoon style.

Nothing can be more unexpected than Rick and Morty working with Run the Jewels. Directed by Juan Meza-Leon, a storyboard artist who also directed the three amazing episodes of Oh Mama, season 3.

The animated music videos consist of dark and brutal mini-Rickventure that will give you a detailed understanding of basically what is going on.

#7) Taylor Swift – Look What You Made Me Do (Lyric Video)

One of the best singers these days, Taylor Swift made her musical return with this music animation that ODD created. If we talk about her style so this video was influenced by thriller and horror movie sequences.

The video maintained the long tradition of listeners who were quite indulging in rampant speculations.

Director Warren Fu and the band “The Killers” already worked on a single video known as “Runaways”. For the second video, the band again chose the same director. Involving the animation, they bring some of the best and stunning animations that lead to the animated music video and make this heartbreaking love story more attractive.

The music production team consisted of Josh Goldstein, the producer of the project, and Jeff Pantaleo as Executive Producer, and Shawn Kim, who was responsible for the direction of Photography.

For exceptional animation, they got connected with Titmouse Studio.

The creative chemistry of Becky Sloan and Joseph Pelling always created some of the masterpieces. Whether you are looking for set designs, windows display, or Christmas Cards, they always give their best in it.

The animated music video Feel Like We Only Go Backwards is one of the Best Examples of their remarkable work.

The Parisian band “Home and Dry” did their project by majorly using the software Houdini. Talking about the dramatic effect in the animated music video was created by filming a motion capture from the band-leading singer Laure Laffererie.

The motion was captured through 2 cameras. For adding the effects of the motion vector, 2D animation was used along with the 3D lightning.

#11) Steven Wilson – The Raven That Refused To Sing

This animation video showed that it was made after the inspiration taken by one of the Russian Animators Yuriy Norshteyn who is well known for his incredible Tale of Tales.

The animated music video shows the intense atmosphere where a thought-provoking short video describes the song much more effectively.

The music animation video is based on the gentle movements done with the hand-cut paper models, which help explain the song theme and idea perfectly.

Taking an idea from the Children Television Style Cartoon Characters consisting of live-action, this video consists of Sandman. The sandman works with the two umbrella girls who are his helpers.

The cartoon music video shows that what is going inside the sandman big bag. Amazingly, the video is designed to fit perfectly with the lyrics written by The Kleenrz, who collaborated with LA rappers, Self-Jupiter and Kenny.

The beautiful part of this video is that you need to listen to the lyrics and music with care. The music and lyrics are pretty engaging that you’ll be able to get the crux of the story in no time.

Most of the time, people easily get distracted from music due to the action in the video.

It’s a pretty impressive animated video, if you want to create one, read out: The Animation Process – 7 Steps To Create An Impactful Animated Video.

The US Duo Jonathan Dayton and Valerie Faris, husband, and wife in relation, respectively, created the music video.

Paying homage to the silent film director “Georges Melies” working on the video “A Trip To The Moon,” an animated video and can be said to be one of the most incredible music videos ever be made.

Daft Punk always comes up with some of the most interesting ideas that are why the song director Kazuhisa Takenouchi was inspired by them.

In 2003 an anime film Interstella 5555, directed by Kazuhisa Takenouchi: The 5tory of the 5ecret 5tar 5ystem based on the Daft Punk videos One More Time, Aerodynamic, Digital Love and Harder, Better, Faster, Stronger.

The shot of the Mirror Kisser was done on a plain white background. Afterward, around 2,740 frames were printed, photocopied, and manipulated before it was sent to edits so that the result would be a fascinating video.

Regarding the music video, you cannot say it is a typical video. It isn’t pleasant and supports the music idea, making it best for animated music videos.

Whenever you talk about the animated music videos, the Gorillaz band will stand every time in this list as the sole purpose of this band was to create a video in this format.

The American Animator Monkmus created various music videos for Badly Drawn Boy, Mogwai, and Death Cab for Cutie. The efforts he put in the Los Campesinos! It stands out as unique and deserves a Hats off.

The video is a connection to other videos that were designed by the band on the war. The illustration style is naïve based on having the infamous Dumbo scene with racing elephants.

London Grammar’s song Hey Now video was directed by Chris Ullens, which showcases the song in the best way. For this video, Chris Ullens collaborated with Sebastien Preschoux, who is a string artist.

The video shows a nighttime setting with strings balls, and the light dances amongst trees until the forest becomes visible.

CRUSH inc. is a Toronto Based team that collaborated with REM to create a fantastic piece of music animation video. Talking about the work, so they have worked with IKEA, Budweiser, and Nintendo.

From the Low-fi Technique to the 3D modeling done with pixelated video games, graphics are excellent.

The different styles in the video make it unique because it is considered a challenging task.

Tomek Ducki, a Poland-based animator and designer, is one of the most prominent figures in the animation production industry. He took part in numerous festival screenings and won the award for his different and stunning work style. Adding minimal style to the video with a contrast of colorwork gives it a mystical vibe.

An animated music video, or an “AMV,” is a music video with animations drawn by animation artists.

Accidents Will Happen (1979) is often considered the first animated music video ever produced.

For further information on animation video cost, check out: How Much Does It Cost To Create An Animated Video?

Generally, a 5-minute 2D animated music video can take up to 2 to 5 months to produce.

Nevertheless, animated music videos play an integral role in the current pandemic regarding spreading positivity, emotional vibe, and whatnot.

If you’re new in this industry and want to make an animated video be it a music or explainer video, For help, you can use 8 Best Software To Make Free Animated Videos For YouTube.

However, if you’re in search of a 2d animation company that offers impeccable 2D animation services, don’t worry. We’ve got you covered! Check out this amazing animated Christmas song we’ve created for one of our notable clients Lorine Chia, a renowned musician and YouTuber.