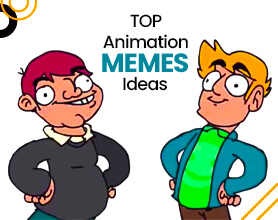 Visual arts and representations have always been an important form of expression; however, these arts’ modes have evolved with time. Whether fine arts, sculptures, murals, or graphic images, every different art form has its identification and impact on the viewer.

One such art form that has gained immense popularity and recognizability is animations. Commonly created with Computer-Generated Imagery (CGI), the animations have become a common use as gifs and animated memes.

With their exceptional storytelling abilities, vibrance, and attractive colors, animation memes have become famous on social media platforms. The animation industry alone had a business of nearly $3.5 billion, which is increasing by 8% every year.

With the definition of animation meme out of the way, today in this article, we’re going to present you with several animation memes and animators that certainly include a good percent of creativity and efforts. But before moving ahead, let’s be clear about what animation memes are.

What Is An Animation Meme?

We all have come across and laughed at several different memes that are circulated on social media. Any image, photo, comment, or dialogue that has instantly become famous and enjoyable for the fun part in it is a meme.

Similarly, on the other hand, an animation meme is any meme created that consists of a character, rather animal, human, or a cartoon, to depict gestures, facial expressions, and features, etc.

How to Create An Animation Meme?

Click on the link below to read more, or head over to our blog section to get a detailed insight into all the WH of animations.

Now, let’s take a look at the animation memes list that we think is the most intriguing and creative.

This animation is a compilation of several animation memes that happen to be created using the same technique, which is frame-by-frame animation.

Frame-by-frame animation, also known as the traditional animation style, basically works by creating illusionary movements by changing the image’s pixels in every frame in an incremental manner.

All the animations in this YouTube Meme are based on a creative visualization of animals and make use of vibrant colors, effects to depict different scenes, expressions, and alphabets.

The animation video is based on anime-style animation. The video is also created in the traditional animation format; however, the style and characteristics of images are what give it a different look which is anime. Anime hails as a Japanese animation style having a more complex basis, a distinct nature of theme and colors.

The animation you are watching below is based on 2D Animations that focus on creating visual arts that move around 2 Dimensional spaces and include creatures, characters, and backgrounds.

A 2D animation is more focused on creating visuals corresponding to the time frames; this means timing every visual frame on the screen for a given time in seconds. This animation majorly consists of 4 to 5 visuals for nearly 30 seconds. The animation is based on the depiction of a story of two characters.

This animation is also created using the Japanese style – Anime Animation, which majorly focuses on the physical features of the characters in the video rather than the background or scene.

As is seen in the video, it focuses on the facial features of the only character included. This significantly includes highlighting the hair, eyes, and facial expression of the character. The video has a minimal focus on the background, as the only thing happening there is the change of colors.

There are a few more than that made to our lists of most trending animation memes. A few of these make use of animation techniques and styles that are more advanced and different than the above mentioned. At the same time, many have an intricate use of color and effects. Scroll down to have a look.

Animations and animation memes are some of the skills that are gaining immense likeability and preference from both animation creators and viewers.

Whether for corporate or social media purposes, the skill has been making its significant place in the market recently.

With plenty of animation creators, the only thing that can help an animator mark their spot is to nail at their works. If you are an animator willing to get your work listed as well, make sure you leave no stone unturned.

The History And Facts About Animation