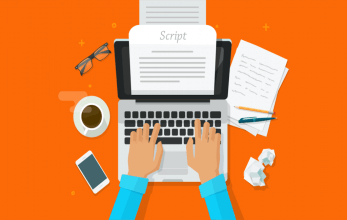 How to Write an Explainer Video Script? 7 Easy Steps 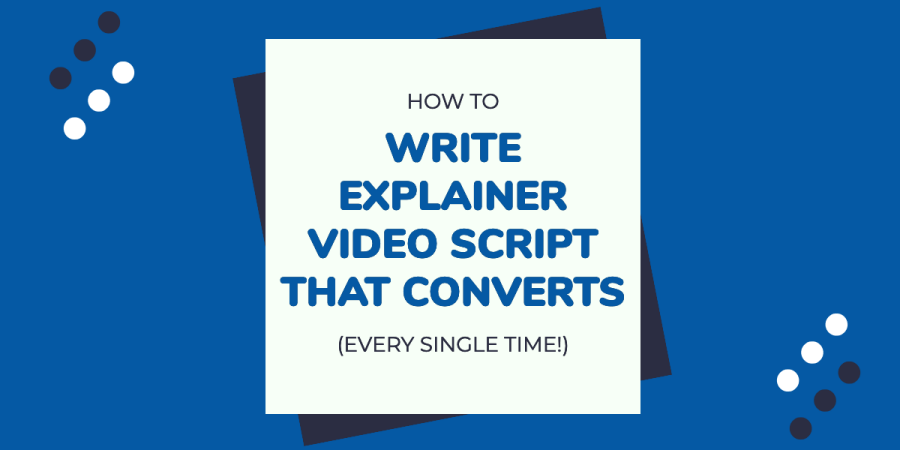 Explainer videos are making quite the buzz these days, and if you haven’t realized the potential of this format by now, you are seriously missing out. Anyways, even if you manage to produce a high-quality explainer video with breathtaking visuals, it would be a waste if the script is not up to the mark. Keep reading as we do a breakdown of the importance of a ‘script’ and how you can succeed in writing one in the perfect manner!

An explainer video script plays a huge role in the overall production process as all explainer video production companies would testify. The storyline, flow of words – all of them matter. A well-written script can even help a mediocre ad succeed. Unfortunately, most brands focus on ‘fancy’ visuals while undermining the most important aspect i.e. scripts.

Importance Of An Explainer Video Script

To explain the importance of an explainer video script, and why you should invest in one, let’s take a look at the one made by the Dollar Shave Club

This company’s ad merely costs $4500 to make, yet has millions of views on every social platform. The 8-year-old ad had a great script. It was hilarious from the start to the end. The script managed to grasp the attention of viewers. Production quality didn’t matter, the script was more than enough.

Even scientifically, Allan Paivio’s Dual-Coding Theory suggests that the brain perceives audio and visuals separately. Meaning that, by creating an explainer video that thrives on both – audio and visuals, you are increasing the chances of your viewer receiving it well.

There’s a common myth that explainer videos are lackluster, boring, and straight-up nonsensical. Sadly, it is true to a certain extent. Most brands underestimate their potential and don’t spend enough time on research. Before creating a commercial, go through past examples and take your time researching before you understand what it takes to create successful explainer videos.

Don’t just follow the typical route of ‘think, create, execute’ – distill your brand’s core values and how it can be perfectly depicted in a 30-second explainer video, for example. Luckily, we’re here to help you with that. Keep reading and learn more about the entire process – starting off with, ‘how to write scripts’.

Here are the major steps to writing a script:

It’s a simple, straightaway process. Know your story, and how you’ll explain it to consumers. The ‘story’ is the key foundation in a script. So, let’s take a look at how you can execute it well:

Brands often overlook their own message and flow away from the actual purpose. The end result is a video that is all over the place and the viewer doesn’t have a clue of what’s going on. To avoid such disastrous mistakes, acknowledge your story.

In any explainer video, there’s a scenario and how your product or service can help solve it. It’s not necessary to follow this format, but it’s highly recommended.

Although, these are vague guidelines. Story scripts can be often complex and require a lot of brainstorming. So, here are a few questions you should reflect upon. It’ll help you realize your shortcomings, and what you need to be aware of. Even an easy script requires a breakdown. So, let’s get into it:

Growing up, we all have gone through some sort of inferiority complex. Especially when it comes to comprehending ‘complex’ text. Hilariously, there was a book series, titled – ‘for dummies’. The goal was simple – help customers understand difficult concepts in the easiest way possible, without any gibberish. Surprisingly, the series has been sold far more than any academic book ever could – just because the masses easily understood it.

So, follow the same strategy in your explainer video script. Distill the story and market it, as if your target audience consisted of children. The enthusiasm, vocabulary, visuals, audio – every aspect should be easily comprehensible.

In our view, the perfect explainer video script should be entertaining to people of all ages. But don’t get carried away with it. As long as your ‘brand’ is family-friendly – there’s no harm in creating a funny, wholesome ad.

Touch your viewers on a personal level. Create a script that has a long-lasting impact. A lot of brands use social issues, politics, and cultural holidays in their videos for this very purpose.

For example, Coca-Cola crafted an ad where the premise revolved around family and Christmas. It had a Youtube center script. Titled as ‘the last customer’ – it has 2.7 million views on the video platform and is loved by consumers in the Philippines and even worldwide.

Even a corporate brand such as Erste Bank used a wholesome animated video for their Christmas campaign. The video didn’t seem like an ad at all – it connected with the viewers in a heartwarming way. The script, music, visuals – they all played a part in gathering over 52 million views!

Apart from these two examples, here are a few points worth looking at:

So, you might have realized by now that the ‘script’ needs to be emotionally captivating and should grasp the attention of users instantly. But don’t get overwhelmed by it. You don’t have to create a next-generation blockbuster ad every single time. Just create a script according to your brand voice and use a comforting tone. Basically, depict ’emotions’ in the video while not getting distracted. A corporate video production company would always ask you about your brand voice as well before it gets started on your video.

The brand’s tone matters a lot and the audience will acknowledge it as such. Showcase the brand as a friendly, go-to, comforting company that’ll cater to a customer’s needs.

#4)  Keep Length Of An Explainer Video In Consideration

How long should a script be? “How long is my script?” Nowadays, everyone consumes content on the go. In fact, stats show that the world is shifting more and more towards digital mediums every day.

It’s difficult to grasp someone’s attention in an already busy world. So, write your script accordingly. Explainer videos range from 30-seconds to even 5-minutes so it’s important to realize what’s best for you. Here are a few templates:

While writing blogs, articles, or any editorial – creative artists often overlook the importance of ‘audio’. Using a crystal-clear voiceover is important in an explainer video, specifically whether you hire a voice artist or DIY.

Here are a few things to consider:

There’s an old saying that – ‘show, don’t tell’ and we need to adhere to it. Even psychologists recommend it. The brain craves visuals and is attracted to them. There’s a reason why most people can binge-watch a show in a day but will take ages to complete a book. Procrastination gets in the way, every time. Remember that our brain grasps concepts from ‘video’ 60,000 times faster. So, utilize this fact to your advantage!

Use animated instructional videos, do cartoon scriptwriting, create an animated screenplay – just focus on visuals. Mind-blowing graphics are definitely appealing to the eye and play a major in explainer videos.

Before launching any product, it is necessary to test it out. Making a prototype and sharing it with your internal team first is a good place to start off with. So, before creating a fully-fledged explainer video, showcase a demo to ‘actual’ people. Do a survey, even.

Go through their recommendations and reactions – it’s better to test something out in front of a few people before it’s shown to millions. Gather different opinions, and reflect upon your script.

So, keep these seven steps in mind when writing a script for an explainer video and you’re good to go! Lastly, here’s a bit of general advice: