The 10 Amazing Examples of Animated Ads 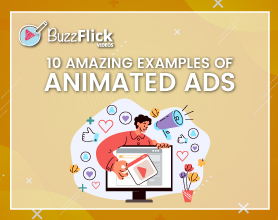 Sophiea Ank
Animated video ads are the best for marketing your business goal efficiently. Check out the 10 best examples of animated ads for inspiration.

After a successful production can’t guarantee the success of the product. Marketing, promotion, and advertisement is the key that helps the product grow and live among the competing market.

And if you want to see some of the best examples of animated ads for your product advertisement then, keep reading this blog.

This is a digitalized era, people like digitalized and animated content for their marketing. Animated or cartoon ads are the most popular ads genre. And here are why animated videos are building their separate fan base:

Animated ads let you demonstrate and explain your business message to the audience in your own way. This blog will later be revealing some helpful information and excellent animated advertising examples.

So, stick to this blog till the end!

What is An Animated Ad?

A short cartoonish commercial video to promote a company, brand, business, product, service, idea, or goal is known as an animated ad.

Animated ads can be showcased in two ways:

There are plenty of animated & cartoon ads examples to discuss, but this blog has short-listed top 10 animated video ads examples.

#1) How to Play CATAN – The Most Adorable Overview Ever


The ad has justified the title.

Catan is the most famous board game among adults and kids. This 2 minutes and 40 seconds animated video ad has wisely and creatively described the gameplay.

The video ad is very entertaining and compelling at the same time. The creator has included the vibrant and eye-catching color combination that matches the color theme of the Catan game.

Animator has captured all the details and game rules and has elaborated beautifully through this video.

The game adventure and entertainment are perfectly described in this animated ad. The voice-over drives you to the whole video and connects you with content.

#2) June: Life is Better When You Share the Ride


What a unique and inspiring animated ad by Lyft.

An academy award-winner John Kahrs has created this masterpiece, where he has elaborated the story of a lonely woman living in South Chicago who started sharing rides.

This video shows a heartwarming story of June – an old widow grandma started working as a driver at Lyft. The story revolves around the old woman who found sharing ride and her life fascinating with the passengers. This animated video ad is touchy and adorable.

Design and animation have made this 7-minutes long video pleasing to watch and made the viewer stick to the video till the end. The ad revolves around the story but shares the message of how Lyft has made the passenger’s life easier and has removed the emptiness from the life of drivers.

This is what you call “perfect branding.”


This is how you animate your advertisement – great ad!

One of the most popular communicational platforms is Slack, which is also famous for its creative animated video ads. But this video is an all-time favorite.

“Work, simplified” focuses on the hustle of the workplaces and briefs the audience to adapt slack to make the work experience more pleasant, easy, and productive.

This animated ad is not bulky or overloaded; simple animation with white background elaborates the core message of Slack marvelously – this ad is an excellent example of the concise yet best-animated piece of information.


If you are searching for a short but detailed animated explainer video ad, this is an inspiration to watch and adopt.

The animator has leveraged the power of motion graphics, lively transition, and informative visuals in this animated ad that provides all the information about the Able in an attention-grabbing animation to keep the viewer’s eyes stuck to the video.

The textual graphics convey the company’s message and move the audience with the narration throughout the video.


The creative team has also invested quality time on the script that can clearly be seen in the video above.


Summa Health has released multiple cool animated advertisements that are not informative but extremely creative. Like the video ad, you have seen above.

In SumTotalCare, the animator has implanted 2D elements that moreover give the 3D animation look to the video, and they have also added creative visuals that revolve around the script.

While watching the video, you must have noticed that the video ad has paid attention to three elements to make the video worth watching:

SumTotalCare has showcased a sense of positivity and a good look throughout the video. No doubt why this masterpiece is on the list of top 10 animated ads.

#6) What Would Christmas Be Without Love?


With the seasonal occasion, it is the practice of the companies to release promotional videos to boost their customer list.

In 2018, an Australian bank, Erste Group, released an animated video ad on Christmas that promoted the slogan “Believe in Love – Believe in Christmas.”

The story orbits around a baby hedgehog whose spikes were always the obstacle between him and his happiness.

The video demonstrates how Erste Bank cares about its customers in every season of life and embraces you the way you are.

This is an excellent example of a brand video, where it’s not hitting the sales pitch clearly but conveying it to the audience through a heartwarming story of the hedgehog.

Animated video really has the power of making people believe and encourage the practices.

#7) The Place You Want to be – by Volkswagen

The animator gave the cars a life and personality that drives the whole story around it in the video. This animated video ad resembles “The Cars” animated movie, which makes it adorable to watch for all age groups.

Volkswagen is demonstrating its car care services and explaining how it will be beneficial to the cars. The animation is very pleasing and once again proved that animated ads can be as good as simple video ads.


If we are talking about the conventional breaker, then how we can forget Nike.

Nike is a famous shoe brand and is also popular due to its creative video ads. They shoot videos with known personalities, models, and celebrities, but this time their creatives had come up with a unique idea – an animated ad.

They have created this artful and attractive animated ad that is aesthetically appealing for viewers to watch and customers to buy the shoes.

Nike is showcasing all of its top Air Mesh from 1990 to 2013, they have honored the design and engineering revolution they have put in their shoes so far.

A brilliant way to revive the old articles and promote the new ones in the same product video.


With a lead pencil animated sketch, Mailchimp has made a video ad that is beautiful to watch and totally different from typical 2D animation.

Mailchimp is calling entrepreneurs and people with small businesses to share their business ideas and goals with Mailchimp. They will automate the marketing and make people learn how to reach new customers.

Instead of a sale-oriented video ad, Mailchimp promotes its services to the audience with an inspiring animation.

Cartoon and animated video ads are the future of marketing.


SYFY Channel has made this fantastic cartoon ad that is awesome both visually and technically.

The video ad revolves around the story of Rick Baker (world-famous Hollywood special make-up effects creator and costume creator) that how he made his first monster mask.

Rick Baker’s story has showcased in this video ad, where the animator combined the minimalistic but strong animation that keeps the audience’s eye stick to the video until the end.

The black & white animated art enhances the depth of the story, and visualization makes the viewer connect to the idea.

This animated video indeed stands as one of the simplest and finest pieces of animation.

An animated video is a powerful tool in the marketing world, and after the digitalization of marketing, animation art has taken over most of the industry.

Animated video ads give you the freedom to portray your business goals, visions, and messages to investors and customers.

There are some reasons that explain to you why animated and cartoon video ads are best for your branding:

How to Create an Animated Video Ad?

Animation speaks your business message on your behalf, out and loud!

Before starting the animated video ads, must consider the following vital points:

Hopefully, you have found the idea for your animated video ad, and the mentioned information will be helpful for you in the future.

If you want some professional help in animation, you should consider BuzzFlick – one of the top animation video production companies that operate in New York, Houston, and Dover but provides remarkable services throughout the world.

They have a skilled team of animators who are masters in 3D & 2D animation, videography, demo videos, explainer videos, motion graphics, and animated video ads.