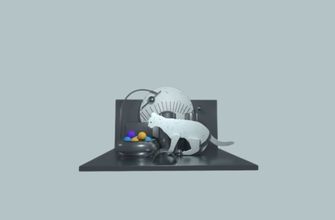 In animation, the trickiest type is 3D animation. It has the same pre-production phase as 2D animation, but things change a lot when it comes to production.

After understanding the pre-production stage in 3D animation, it’s time to take the learning to the next level. We will see what happens after the brainstorming and designing and how the teams execute the plan.

P.S: Interested in learning about 3D animation comprehensively? Give a read to our guide on the 3D animation pipeline.

In this article, we will be focusing on the most important phase of the production stage, the animation layout, which is related to the animatic. The process of 3D animation layout should get started when the final model’s proxy geometric is about to get ready.

In order to make the 3D animation fast and smooth, and as animation layout is a bit long process, animators begin with it in the pre-production stage and continue it till the post-production.

What is the 3D Animation Layout?

The proxy models are created for the better representation of the final 3D model with correct dimensions (shape & size) and demonstration of the model. In addition, the proxy models, along with character movements, play an essential role in starting the animation layout.

Animation layout helps the layout artist to decide what should be displayed on the screen according to the provided storyboard and instruction.

In short, animation layout is a process where the environment has been conceptualized based on the story (script & storyboard).

The Need for 3D Animation Layout

In 3D animation, at first, the animation layout seems a little basic, but it is the most important component of the 3D animation pipeline.

We all know that copying that 2D animatic in terms of character scale, movements, distance, and perspective is relatively easy than 3D layout. That is why this step is used to prevent character duplication.

Apart from the above, here are some points that make 3D animation layout essential for the animation:

The Role of 3D Animation Layout Artist in An Animation House

In computer-aided animation, the job of 3D animation layout artist is the same as the cinematographer in a live-action project.

The team develops several animation scenes for the director and editing team to understand where to put what character.

The creation of an animation storyboard is the first step the layout team begins with. They create it with the collaboration of the project director. Next, the material that has been prepared in the pre-production phase, layout artists begin developing scenes in a 3D environment with them and use proxy models to make the development smooth.

The layout artist first animates a character and adds motion to it, which will become the reference point for the further fine character animation. The animation that is done in this phase is usually temporary, but the camera movements made by the layout designers will be used throughout the project.

The Responsibility of 3D Animation Layout Artist in an Animation House

The position of a 3D animation layout artist is quite important in a 3D animation studio. Therefore, those artists are preferred who have a deep understanding of various points like cinematography, lighting, acting, blocking, animation, and more.

Along with the above, the artist should be creative and imagine the project at the level of success. The tasks that are referred to a 3D animation layout artist depend upon the requirements of the project and production phase, but the core responsibilities of a layout artist are following:

3D animation is not as easy as we explain in our articles, but it is easy for those who work with it on a daily basis – the animation companies.

Animation studios around the world create thousands of animations projects daily, which makes them experts at this skill set. However, animation requires patience and practice, and all those who work at animation companies are the best in their jobs.

On the internet, there are various animation companies that claim to be experts in animation are actually self-proclaimed businesses that create hype but do nothing. They charge a good amount from you and provide you nothing but loss.

Here are the top 3D animation production companies that are the best in the business and ready to serve you according to your requirements & demands.

But if you want your project done by a company that understands your business goal as theirs and is ready to reshape your marketing strategy, BuzzFlick is the right option for you.

BuzzFlick is an award-winning video animation agency located in NYC and has created numerous 2D & 3D animation projects in collaboration with renowned companies.

It has the best and most skilled teams of animation, direction, scriptwriting, editing, production, and managers who put their 200% in the project to help you achieve your goals.

You can faithfully trust BuzzFlick with your project, money, and time, and we will provide animation beyond your imagination.

BuzzFlick’s sales representatives are 24/7 available at your service and are ready to discuss your project. Feel free to contact us.

Once the pre-production is over, the next step is the production, and this phase starts with a 3D animation layout, which basically is a 3D form of animatics.

3D animation layout is said to be a primitive version of the product of the 3D animation production. It helps the animators and the rest of the team to stay on track throughout the pipeline.

This step actually guides the animator to the 3D modeling, where the artist creates the complete 3D animated character.

Hopefully, you now have a clear overview of the 3D animation layout and how much It is useful in 3D animation production.