Animation Storyboard – Everything Worth Knowing 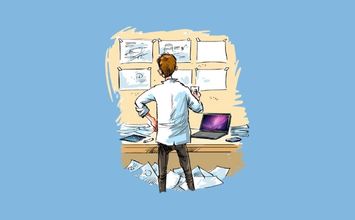 Eich Eyf
Creating a storyboard is an essential part of making a good animated video. Read our blog to learn everything about animation storyboarding.

Having a proper workflow is essential no matter in which industry you belong. Professional animation companies have a well-defined methodology called the animation production pipeline, which lists and checks each task required to create a 3D animation.

Generally speaking, the animation pipeline is separated into three stages:

If we go into the details of each animation production stage, we’ll see each stage consists of different steps.

Starting from pre-production, it consists of the following main steps:

Well, each step plays a significant role in animation. But among these, Animation Storyboarding is a critical phase in the video production process since it converts the screenplay into visuals for subsequent development. Indeed, it is the script’s initial visual manifestation. In an animation studio, this step should never be overlooked.

Today in this blog, we’ll walk you through the core principles of 3D animation storyboarding.

An Overview: Storyboard in Animation

Okay, first things first, when you plan to make a 3D animation video or film, you first look for a unique idea that your viewers will find compelling. Once you’re done with all the brainstorming, you put your ideas on the paper – which means you write a script.

If you want to learn about scriptwriting, do give a read to a conclusive guide on scriptwriting for animated videos.

Next comes animation storyboarding. Basically, a storyboard is a sequence of drawings based on the script. It’s more of a visual guide that helps you determine what your story will look like throughout the process.

A storyboard acts as a diagnostic tool that can assist you in identifying weak places in your storyline, probing for the potential for improvement, and experimenting with other ways of illustrating a concept.

Major or minor flaws in the story or script will quickly become apparent with storyboarding.

The main part of storyboarding is elements like camera details such as transitions, possible visual effects to enhance each shot, audio notes, and certain significant character postures or scene events. The entire team must get a sense of how the finished animation will look and feel.

A storyboard contains a variety of information, such as initial concepts for camera placement, transitions, and special effects to improve each shot. In short, a storyboard acts like a necessary tool that helps everyone on the team rely on it to get an idea of what the finished animation will look and feel like.

Animation industry giants such as Disney+, Illumination Productions, and Pixar have numerous storyboard artists on board because they need to have a final storyboard prepared before moving into the production stage.

Before we go into further details, let’s first learn about the origins of the storyboard – how it all begins.

The Saga of Cartoon Storyboard – How It Got Started

Webb Smith, an animator at Disney, is said to have come up with the concept. On separate pieces of paper, he used to create each scene and then pin them up on a bulletin board, which was the first kind of storyboarding. Other studios soon followed suit, embracing the concept. By 1938, all American animation companies adopted the practice of using storyboards.

Pre-production has become an essential aspect of the whole production process for both animated and live-action productions. One of the first live-action films extensively storyboarded was Gone with the Wind (1939).

After World War II, storyboarding became a common practice in live-action film production and was adopted as a standard pre-visualization method.

How to Make A Storyboard for Animation?

Well, there are two ways to approach storyboards:

Animators developed a basic premise and began storyboarding their ideas without first creating a script. This was common practice in the early days of animation. For 3D animation, however, this method is no longer advised.

There is much room for misinterpretation because of the magnitude of productions and the wide range of options that 3D animation has opened up.

Some producers may find it simpler to bypass the scriptwriting step and move immediately to storyboarding if they have limited resources or smaller teams.

Choosing the appropriate method for storyboarding depends on the individual demands of each project. However, the first technique is generally more suited for 3D animation studios with larger projects, more extensive staff, and many clients.

Let’s take a look at some of the popular animation storyboard examples:

Stages of Storyboarding in the Animation Process

In the animation process, there are three main stages of Storyboard:

The specifics of storyboarding are assessed against the available resources, and a timeline and deadline are established during the storyboard planning stage. Storyboard artists then get down to the business of developing storyboards based on pre-production planning.

To revise, you must meaningfully version your storyboards. The same version can be used later if only minimal modifications are needed. However, if significant modifications must be made to the Storyboard, the document will be re-created as a new version.

If there is a requirement to compare two or more versions side-by-side, past versions and their succeeding drafts s should be retained as a reference. It’s not unusual for projects to undergo these kinds of revisions.

The Look of 3D Animation Storyboard

Storyboards may range from simple drawings to highly detailed depictions of concepts made by storyboard artists using cutting-edge software and digital art tools. The more complex or large the product, the more critical it is to have a well-developed storyboard.

Storyboarding with color palettes may be necessary for certain cartoons, while an outline is sufficient for others. Whether or not to dive deep into intricate coloring at this point rather than employing greyscale color is up to the production team.

However, you should not anticipate seeing a lot of information in a storyboard. Details will be incorporated into the design stage and addressed appropriately.

Storyboard panels are structured in a unique way by each animation studio or artist. Panels are given a scene number, shot number, conversation, action, and staging boxes. Most projects use a six-panel single-page template in an animation studio, like the one seen below, which stacks three panels on top of each other at precisely the proper ratio.

Storyboards can be improved by adding descriptions beneath the images, indicating camera motions using arrows, and using different colors for the foreground and background elements, respectively.

Animation Storyboard Labelling: Why is it important?

It is critical to properly label each shot in order to maintain the project’s organization and make it simple to locate individual panels. Controlling the order of the panels in most storyboard software is a piece of cake.

Let’s quickly take a look at the example of why you should label an animation storyboard:

Why Do Animators Use Storyboards?

The Storyboard serves as the script for animators that bypass the scriptwriting portion of the animation workflow. They feel this is the quickest and most successful method for them to get through a story.

Occasionally, storyboards serve as an alternative method of conceptualizing and producing a story.

However, reputable 3D animation services providers do not recommend this strategy.

The fundamental purpose of storyboarding is to visually represent the story/script effectively that is as near to what the final 3D animation is meant to look like. When viewing it, the viewer quickly understands what is happening in the story.

Additionally, modifications are considerably easier to make in storyboards than they are in completed renders. A 3D animation company must plan appropriate actions during the storyboarding phase rather than during production. Confirmed storyboards will serve as the foundation for any further developments.

Without question, storyboarding effectively bridges the gap between the script (or story) and the final 3D animation output. It is a critical component of the pre-production stage of the 3D animation pipeline because when used effectively, it streamlines production, gets everyone on the same page, eliminates mistakes, and keeps things on schedule.

A storyboard is a concise and effective way to communicate what is necessary throughout a 3D animation pipeline production at an animation studio. While the structure and amount of depth of the storyboard are customizable, all storyboards should contain three primary categories of information: the order of scenes, whatever the audience will hear or see on the screen, and the technical details for each scene.

If you have an excellent storyboard in your hand and looking for some help from an expert, consider BuzzFlick. We are one of the best 3D animation studios in the industry, offering plenty of services, including 2D and 3D animation services, video editing services, and post-production services.

So, what’re you waiting for? Talk to us now!

Storyboard in animation a visual representation of your story will unfold. Usually, the storyboard is made up of squares with pictures and illustrations with text that defines that particular shot.

You can create a storyboard for animation with the following steps: