Explainer Video Characters: How To Create A Compelling One? 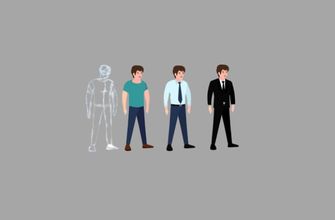 Your explainer video’s protagonist has the power to choose the story’s outcome. Make a distinctive animated character that your audience will appreciate by learning how to do it right.

You always put your best effort while creating an explanation video for your brand’s advantages. You build a storyboard, a storyline, and characters and then figure out how to present them to the audience. Explainer video characters have the power to make or break your video’s outcome.

As a result of using animated avatars, your clients and prospects will be delighted. Animated videos share many similarities with cartoons: they both contain narration, characters go through various scenarios (which your audience is familiar with), and the same set of circumstances. Animated videos help you develop closer relationships with your audience.

‘Create a narrative that revolves around your consumers’

That’s right! We couldn’t agree more! By making your animated video heroes seem like your customers, you’ll be able to interact with your customers on a more personal level.

Characters can help build stronger relationships and increase corporate growth, but they can also set the correct tone for the tale. The advantages of your product, service, or concept can be better explained by them than by just stating them.

Most marketers (94 percent) feel their products and services benefit from video marketing. An entire tale can only be told when characters are involved. It’s possible that the character’s facial expressions say more than their words.

The Perks Of Using Animated Characters In Explainer Video

It’s a good idea to use animated characters in your explainer animated video. When applied correctly, they help to humanize your brand. By introducing characters into your video, you can ease your customers into your product, email marketing, and social media marketing. However, the use of animated explainer video characters isn’t only about making your content more relatable.

For example, a feeling of nostalgia. Good vintage cartoons can jog people’s recollections of simpler times when they were young and carefree. Your audience will appreciate the opportunity to relive those feelings once more!

By using animated videos, you can expand your consumer base without putting in much effort. It facilitates in development of a humanistic approach even for brands that operate in tech-oriented industries.

Using an animated character allows you to tailor your marketing message to each individual consumer. You can create the illusion of one-on-one conversation by using visuals and animation in the video.

Explainer videos can be used in conjunction with other types of videos as part of a campaign. Try combining an animated explainer video with motions or a whiteboard, and I can assure you’ll be amazed by the results you’ll get.

Take a look at the video below to witness how beautiful and captivating animated characters BuzzFlick has created from scratch for their valued client’s animated explainer video project.

Presently, 81% of companies utilize video to sell their products or services. As a result, there is a lot of video production going on, and the stakes are high. If you want your explainer videos to be as effective as possible, you should include the following components in them:

A terrific storyline, flawless animation, and top-notch audio are all essential components of an effective explainer video. You can also ask for assistance if you’re unsure whether or not you’re capable of creating a masterpiece yourself.

Syncs perfectly with your brand’s vision and clientele

The video must be tailored to your clients in order to be effective for your business. Creating a video that answers your audience’s queries and solves their problems creates trust and strengthens your relationship with customers.

Hire a professional for voice-over

Use a professional voice-over to enhance the video’s performance. To begin, it must be in their language. Second, only native speakers should perform the voice-over work.

60 to 90 seconds is the ideal length for a character animation explanation video. This amount of time is sufficient to pique the interest of visitors and provide them with a thorough understanding of the plot.

If you’re still wondering why using animated explainer videos is so important these days in the corporate world, then you must give a read to our blog key business problems you can solve using explainer videos.

It’s a great idea to employ different types of explainer video characters in your explainer video to establish the right setting for your narrative. Each form of character in an explainer video has its own benefits and may captivate a diverse range of viewers. This means that you should never forget about your customers – what do they appreciate, what kind of cartoon character would best represent them?

Consider the video’s tone, setting, and content while selecting a character. It’s much easier to pick the right character when you know what you’re trying to accomplish.

A cartoon explainer character is a drawn representation of a persona, an emotion, or a circumstance. Cartoon characters are quite vibrant and saturated. As per the rule book, they are frequently overdone, and events are exaggerated.

As the name implies, these are animated characters that look like real people and depict real-world scenarios. There is no room for hyperbole or exaggeration in this particular situation. Everything should look and feel like it’s taken straight from the pages of a novel.

In explainer videos for B2B, government, banking, and financial organizations, real-life people are often featured because it helps people to easily relate to them.

They are a unique combination of cartoon and realistic characters. These characters resemble genuine clients; however, some characteristics can be exaggerated. Stylized characters are ideal for a wide range of enterprises, from the government to entertainment.

The first scenario that springs to mind is when you still do not grasp your audience. Sometimes the plot is more important than the characters in the explainer video. If this is the case, it is preferable to employ stick figures in the video.


Are you on a tight budget and planning to animate characters yourself? Not a problem we have a solution for you, check-out the best online character animation makers.

How can you create a character that your target audience adores? There are various recommended practices for animated videos that will significantly impact the performance of the characters you employ.

Joy, fear, and despair. It’s possible for your character to experience a wide spectrum of emotions. Empathy is the name for this. Empathy is a powerful tool for fostering great customer-company relationships, and it may be employed in a variety of ways.

When your characters act and behave exactly like your clients, they begin to identify with the character. As a result, kids begin to mimic the characters’ behavior. They deal with the same issues, use the same goods, and have the same thoughts. Consequently, the video becomes fascinating and enticing.

Add some humor and spice

In a video, nothing works better than comedy. There’s always an alternative approach available through which you can deliver your idea and message. You don’t always have to opt for a serious and highly professional approach.

Many firms find that comedy is more effective than any other marketing strategy. There’s no harm in injecting some levity into even the most serious endeavors.

If you want to learn the art of creating animated characters, then do give a read to a brief guide on how to create amazing animation character design.

Do You Want An Explainer Video Character? – Talk To Us!

Are you ready to create video characters for your animated sales explainer video? Trust me, and it’s a great opportunity to engage with your prospects and convert views into sales.

But not every company has animators or creative artists onboard. Do you know what they do? I’ll tell you; they outsource their video projects from reputable video animation agencies. And we are one of them!

BuzzFlick – is one of the top animation outsourcing companies, and we are happy to assist you at any level of the character creation process, from concept to final product. We have a team of creative animators who are capable of creating captivating characters. And yes, we also have professionals, so you don’t have to stress about finding the right voice for your business.

Your explainer video character can become your brand’s ‘spokesperson’ but only if it’s highly engaging and compelling. However, creating characters for an animated explainer can be a time-taking and intricate process, but it’s totally worth it if you can get it right.