What Is Hand Drawn Animation? (With Movie Examples) 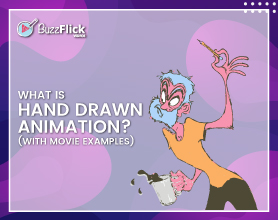 What is Hand-Drawn Animation?

This type of animation, known as “cel animation” or “hand-drawn animation,” has long been the most common animation style in cinema. However, computer animation has overtaken it in popularity.

However, despite improvements in technology, the hand-drawn animation process is still time-consuming and labor-intensive method.

The first step is to create a set of storyboards that depict the film’s visual style. To guarantee that the animators know precisely when a character is speaking or bursts into song, they are synchronized with the film’s pre-recorded music.

Character designers then create model sheets to guarantee that the appearance and movement of the characters are consistent across the board, as many animators are engaged.

Once all of this is done, the animation begins!

Transparent sheets of paper are used to create animation sequences by drawing one frame at a time, ensuring that each frame is perfectly aligned with the music. For example, a character’s lips move while they aren’t talking.

Each animation sequence’s backdrop is painted by background painters who use oil paints or watercolors.

After the images are polished and cleaned, the next significant step is to turn them into a film!

Celluloid (cel) is the thin, translucent sheets of plastic on which the drawings are transferred. Once a sequence is placed into cels, a special animated camera is used to film it. The finished film is sent to be developed and processed once all the sequences have been shot.

However, the growth of computer animation has led to a decrease in the number of conventional animated films being made, although they remain a tremendously popular form of entertainment to date.

[ctanew cta-atts1=”Want to Get Your Hands on the Best Animated Characters?” cta-atts2=”Hire Our Professional Character Designers for Your Project.” cta-atts44=”Let’s Go!”]

When Emile Cohl made his first animated picture, Fantasmagorie, it was regarded as the first animated film ever shot on a sound stage by historians, making it an early example of conventional animation.

It was sketched on paper and then photographed onto a positive film for each frame.

We’re going to spend a lot of time talking about Disney Studios because they were one of the most influential studios in the history of animation.

Hayao Miyazaki’s 2001 masterpiece Spirited Away was the only hand-drawn film to win an Oscar created its Best Animated Feature category.

There have been many great movies, from Shrek to Wall-E to Spider-Man. Only Wallace and Gromit: Curse of the Were-Rabbit, a 2005 stop-motion animated Wallace and Gromit film, was created by hand (with 2021 nominee Soul likely to follow suit next month). In my opinion, that’s unfortunate.

3D animation indeed has a lot of advantages over 2D, but there are some aspects of 2D that can’t be replicated.

A few hand-drawn animations movies are created each year, but recent decades’ most popular animated films have mostly avoided them, at least here in the United States. In Japan, the more traditional look is still preferred.

Lion King was one of the largest moneymakers of all time; in the 1990s Disney Renaissance, feature-length 2D animation was treasured by devoted fans rather than the general public, even as it still flourishes on television.

A few years after Tangled and Frozen, Disney’s last hand-drawn attempt, The Princess and the Frog made a decent opening at the Hollywood box office, but it paled in contrast to the success of those two films.

To learn in more depth how it was like to create hand-drawn animated films, we’ve managed to pick some of the famous and well-done works of the time.

The sea waves crashing the massive whale to rain falling and lightning flashing, each of the special effects had to be achieved in-camera using techniques the animators were inventing along the way.

They still dazzle the eye!

Despite the film’s poor box-office performance, its art deco aesthetic and ambitious scope (it was the first Disney feature to be created in 70mm widescreen format) has been lauded by animation lovers today.

When it comes to aesthetics and villains, Maleficent is a must-see. Even if the plot is a touch flat, we can blame the original fairy tale for that.


‘Aladdin,’ an animated musical fantasy film by Walt Disney Pictures Animation, is based on the Arabian folktale “One Thousand- and One-Nights collection.” After its 1992 release, the film brought in $504 million in global box office receipts.

Aladdin’s original design resembled actor Michael J. Fox. Still, the designers decided to tweak the look and make it more like a combination between Tom Cruise and a Calvin Klein model.

Animators from both Disney’s California and Florida branches worked on the project simultaneously; therefore, each character was created independently.

Even though communication was limited to faxes and phones, artists created a fantastic explosion of visual art despite the difficulty of organizing and matching the process.

The animators had to utilize an actual piece of fabric as a reference to give the carpet a more realistic aspect. After creating the animation, they used computer software to recreate the look of the genuine material.

Even more, they videotaped monkeys in their natural habitat at the San Francisco Zoo and then utilized that material to replicate their actions. Although the short was made in 1992, its design and animation are still impressive.


As a youngster, this was one of our favorite cartoons, and we thoroughly loved it. When we were kids, we had no idea that those 88 minutes of the film culminated years of effort by more than 600 animators and professionals.

The animators partnered with wildlife specialists and made a memorable trip to Hell’s Gate National Park in Kenya to design the characters and produce realistic movements for them. Because of this, the film’s surroundings and the animals’ motions and behaviors became more lifelike.

The wildebeest stampede sequence took the animators three years to create, yet it only lasts 2.5 minutes! When it comes to making animals more lifelike, this was the first time computers were used.

Deceptively simple line drawings and mesmerizing backdrops wonderfully accompany dense sci-fi-tinged ideas about time and life in his three most acclaimed works, the trilogy of short films known as World of Tomorrow.

More than $450,000 was collected in a recent Kickstarter campaign to support future chapters of the series, indicating that fans have found plenty to enjoy in these understated films.

The hand-drawn animation films we have listed are some of the best and most remarkable of all time.

If you want to grow your expertise, we suggest checking out the Animation Tips – Do’ and Don’ts.

Or, if you get stuck by any chance, you can seek help from BuzzFlick – one of the best video animation companies that can create amazing animation videos for you without costing you a bomb.  Their team of experts is highly capable of producing quality animation projects in a flash.

We hope we must have enjoyed reading this article.

Thank you for reading!