How to Create an Attractive 3D Character Animation Video? 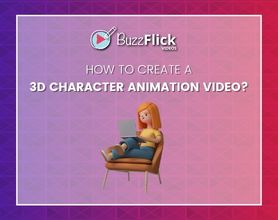 3D animation has taken over and made its place as the best visual representation of structures and architectures in the past few years.

3D animated video is overall a big and difficult step for a beginner, but starting with 3D character animation will reduce hurdles and prepare the animator for video animation.

Check out the 3D animation guide for a quick start.

What is 3D Character Animation?

The process of creating images, characters, objects, and structures that move in a digital space of three-dimension is known as 3D character animation.

3D character animation adds a personality to the character with actions, movements, emotions, and expressions. It involves creating a character that resembles the object in real-word (either static or moving).

You can just make a 3D character or use different 3D models to create an entire video, movie, or game.

You can use 3D characters in the explainer videos, product demo videos, and marketing videos to demonstrate the details of an object, product, or concept.

3D animation adds life to the characters, making them pleasing to watch and attention-grabber for the audience.

From a business point of view, 3D animations are highly engaging and attractive to watch for all age groups, making them beneficial for business. If you use them for promotion, it will turn lead to potential customers.

These eight steps will make character animation easier for you and guide your imagination in a better direction.

Ask a few questions to yourself to have a clear mind-map for animation:

Once you have clear answers to these questions above, fifty percent of your preparation is done. Next, you have to work on is observing people around you.

For a convincing character, you need to observe the relevant objects with a characteristic or facial resemblance to the animation you are making. Observe how the object talk, walk, give expression, and respond to actions.

Observation will help you decide how your character will act in a certain situation.

After brainstorming and observation, go for storyboarding. It will help you set a sequence of illustrations for a character. It will outline the flow of the story and deliver the scenario to the audience in an effective manner.

P.S: must get reviews of others on the storyboard. If any suitable alteration occurs, fix it right away.

#2) Time to do 3D Character Modeling

Once you have an approved storyboard, it the time to start designing and animating the character. The modeling will help you to proceed with shaping and molding the final look of a character.

Using different tools, you can draw a character and reshape its appearance, add emotions, and variate the actions. There are many of them available for animation, but you can check out the best 3D animation software that are paid & free, and practice your ideas on it.

If you want to practice your animation on your smartphone, check out these handy and easy-to-use 3D animation apps for Android and iPhone.

Related Article: What Is 3D Modeling? A Brief Introduction

After character modeling, the vital step is the makeover – giving clothes (texturing) to the 3D models. While texturing, colors, texture, and overlapping are added to the character to enhance the appearance and sharpen the features.

Software like Adobe Photoshop and Mixamo are quality tools for texturing and provide a wide range of animation styles.

You can freely design a customized texture for a particular 3D model to distinguish it from the rest.

Note: texturing is where your creativity strikes. You can make a “one of a kind” 3D character animation with design, color, painting, and shading.

Rigging is known as skeleton animation, the process of defining the gestures and movement of a 3D model.

The animator implements this approach by using a sequence of interconnected bones. An interesting thing in rigging is that you cannot just perform rigging on the characters inspired by living things (human or animal); you can rig any model; it can be a galaxy, building, vehicle, or literally anything.

Fun Fact: the Pixar Lamp was one of the first 3D models that went through the rigging.

A showreel by CG Meetup of Character Rigging will help you understand the clear concept of rigging in 3D character animation. Take a look.


Skinning is the next step after rigging, which involves merging all the parts of the 3D model to the rigged skeleton.

Related Article: Introduction To 3D Rigging: How To Do It In 4 Easy Steps

The most interesting part of making a 3D character is “animation”, this is where all the magic begins. The animator alters the character frame-by-frame, which resembles the conventional technique used while creating hand-drawn cartoons.

For better animation, lightning and camera adjustment is essential. Whatever is on the display screen, the lightning affects the scene.

For example, you are trying to portray the night scene of the sky with the movement of stars and supernovas, but the lightning is not proper; it will ruin the whole scene: bright light can give it more of a day look, and dim light will make stars less sparky.

If we talk about the camera, like lighting, camera placement is also important. A wrong diversion can destroy the whole scene.

The last step of 3D animation is rendering, where all the parts are converted into files for shot and clip compilation.

While performing a final rendering, make sure that your attention has gone through all the animation’s essential parts and you didn’t miss any important detail. Once rendering is done to the wrong elements, it will become a lot harder to fix.

After composition, you have to add music and background sound to make it more compelling to watch. The final polishing and editing are done to the animation to make it presentable.

This step is a final check to the whole seven-step, must go through this process before delivering to the client.

We have included all the possible steps of the 3D character animation process, and hopefully, these steps will help you create a top-notch animation.

If you are looking for professional 3D character animation work, check out the top 10 3D animation production companies you can hire for an animation project.

BuzzFlick provides excellent animation services throughout the world and has franchises in New York, Houston, and Dover.