Eich Eyf
Solid Drawing Animation is the 8th principle of animation. Read our blog to learn about this 8th principle in detail along with some useful examples.

The 12 Principles of animation are the most fundamental techniques every animator should master at.

Animation is a complex technique, and it’s essential to understand its language. The two pioneers of animation, Ollie Johnston and Frank Thomas, created 12 principles of animation back in the 1930s. However, they were first introduced in The Illusion of Life: Disney Animation, the greatest book in animation history.

These principles came to the surface in the era of pencil sketching; however, these same principles of Disney also apply to digital animation as well.

If you want to create realistic yet appealing character animation, then my pals, you need to follow them religiously.

Among these 12 principles, the 11th principle of animation, Solid Drawing, hints at how to make realistic animations.

In the book ‘The Illusion of Life: Disney Animation’ Johnston and Thomas defined the Solid Drawing principle as,

“Taking into account forms in the three-dimensional space, or giving them volume and weight.”

The animator must be a talented artist who understands the fundamentals of three-dimensional forms, anatomy, weight, balance, light, and shadow. This entailed attending painting school and sketching from life for the classical animator. Johnston and Thomas also advised against producing “twins”: figures whose left and right halves were identical and seemed lifeless.

Solid Drawing In Animation: The Definition

Solid Drawing Animation is the technique of creating a drawing’s weight, height, and depth to make it appear believable on a 2D surface. This animation method adds volume, weight, and balance to the drawings, transforming them into three-dimensional elements and characters.

Solid Drawing is a method used in 2D animation to give a picture depth and weight. This method creates a three-dimensional impression for the two-dimensional image.

The way an object is positioned on a two-dimensional surface determines its appearance and creates the illusion of a three-dimensional object. An animator’s ability to draw an image from any viewpoint is critical. Once you have a solid sketch of the image, you can quickly animate it to give it a more realistic appearance.

The Primary Uses Of Solid Drawing In Animation

Almost everywhere, Solid Drawing Animation is employed. All 3D video graphics for films, games, advertisements, and cartoons use Solid Drawing to create lifelike 3D animation. While converting a solid picture to animation, the animator must ensure that the figures’ mass, size, and shape are generated according to their personalities and needs.

Examples of Solid Drawing In Animation

As we have mentioned earlier, this principle of animation applies to the traditional, also known as hand-drawn animation and digital animation styles.

If you’re not familiar with the traditional animation style, then first give a read to our blog, what is hand-drawn animation with movie examples.

Let’s take a look at the example of both styles.

It shows a couple of simple sketches of Mickey Mouse and notes about them that support the information we’ve already discussed, explaining how by simply placing a character at a slight angle, you can eliminate the element of “twining” and create a far more realistic three-dimensional character within your animation production. 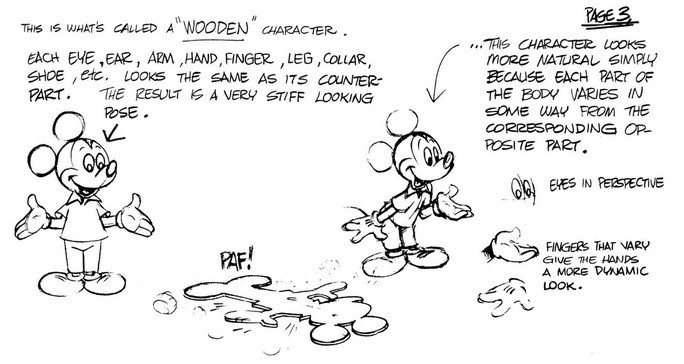 Another artwork excerpt, this time from the book ‘The Simpsons Handbook, secret hints from the pros, can be found here. It demonstrates a clear example of solid drawing from a recent animation production.

Homer seems flat and cardboard-cutout-like when viewed from the ‘front perspective,’ while by tilting his head slightly to the right, the problem is remedied, and the artwork becomes more realistic and three-dimensional once more.

How Should Animators Use Solid Drawing Principle To Make Animations?

The animator who develops the Solid Drawing should be an experienced draughtsman with experience drawing and laying down 3-dimensional shapes.

Additionally, he must comprehend the fundamentals of weight, light, anatomy, and shadow in order to generate a picture that can be translated onto a three-dimensional surface. The animator who converts the solid drawing to the computer screen must be proficient and have a firm grasp of composition, shadows, and lighting.

To create a more lifelike animation, the animator should also be familiar with the various camera angles, the image’s screen projection, negative space perspective, the character’s attitude and scale, and the figure’s visual balance in relation to other components of the screen.

We hope you’ve enjoyed the interpretation of the 11th principle of animation – Solid Drawing Animation.

But this is only one principle of animation. If you want to become a successful and well-versed animator, you need to abide by all the 12 principles of animation.

If you’re searching for a creative team of animation artists, then hire team BuzzFlick – we are one of the par-excellent video animation companies. Our revolutionary animation creators are highly skilled and professional and capable of creating unique animations that grab your audience’s attention efficiently.

Now that we have reached the end, we hope this blog will be of great help to you. Good luck with your animation project.

The solid drawing concept entails considering shapes in three-dimensional space or assigning them volume and weight. The animator must be a talented artist who understands the fundamentals of three-dimensional forms, anatomy, weight, balance, shadow, and shadow.

The 11th principle of animation is Solid Drawing.

There are 12 principles of animation, which are: