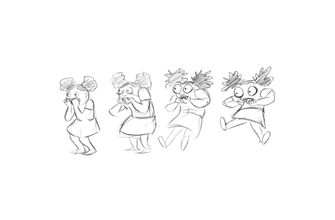 Eich Eyf
Staging is the 3rd fundamental principle of animation. Read our blog to learn what the staging principle is, along with some useful examples for its application.

To begin answering any of these questions, one must first comprehend the twelve animation principles. Disney’s 12 principles of animation, made famous by two of Walt Disney’s famed Nine Old Men, Ollie Johnston, and Frank Thomas, have become a must-know for all aspiring and current animators in the business today.

Among these 12 principles, today, we’ll shed light on the 3rd principle of animation – Staging. We believe it’s one of the most important principles that can make or break your animation.

In 1981, Disney animators Ollie Johnston and Frank Thomas published a book titled The Illusion of Life: Disney Animation, which was written by Ollie Johnston and Frank Thomas. The book, which has been a significant resource for animators all around the world since its publication, defined the 12 essential principles of animation, which are still relevant today.

In the book, The Illusion of Life: Disney Animation, Ollie and Frank defined Staging as,

This principle helps animators to portray a particular expression or mood to the audience while diverting their focus from the other unimportant elements or details in a specific scene or frame.

In this method, animators can convey to the audience the atmosphere, reactions, and feelings of characters in a particular story by using animation techniques. In addition, staging can assist in informing an audience about the narrative.

How Should Animators Use Staging Principle To Make Animations?

The staging of a story is an extremely effective instrument in telling a story. In every scene, the animator strives to create a cohesive composition. Staging is intertwined with the elements of acting, time, and setting.

First and foremost, the emphasis should be maintained on what is truly important. It is possible to achieve this by a variety of techniques, including the location of a character in the frame, the angle and position of the camera, and so on.

To achieve success, he or she must adhere to the following principles:

As a result, the background, foreground, and characters should all function in harmony and complement one another. They should convey your characters’ objectives with each pose or action.

This will assist the audience incorrectly interpreting the message you are conveying. This is especially critical for educational videos, explainer videos, and the like.

P.S: If you want to learn more about animation and what necessary things you should and should not then do give a read to our blog, animation tips – do’ and don’ts.

The Primary Uses Of Staging Animation

The staging principle in animation is commonly used in theatre, cinema, and television performances, among other places.

Animation videos should be developed in the same way as more complicated things are. There are numerous staging approaches and technologies that can assist an animator in telling the tale more quickly.

Pro tip: You can increase your customer retention rate by using animated videos. Read our blog to learn how animation is beneficial for your business.

Examples of Staging In Animation

One simple strategy is to keep the characters of interest in the camera frame for half or a third of the frame. When you divide a frame of a shot in half or thirds and place the character in those areas, you are able to maintain the audience’s attention while also emphasizing the significance of that character to the audience.

Our attention is drawn to Princess Leia, who occupies the middle third of the screen. Her character and the Empire are being revealed at this stage in the narrative. So, we can better focus on what she is saying because of the staging. A group of stormtroopers around her tells us that she is in peril.

Sets, other characters, and camera angles can all be used to guide the audience’s emphasis in the direction you want it to go.

The fact that all of the pilots are looking directly at Princess Leia grabs our attention. We can infer from this that she is making an important point. Similarly, she is encircled by orange and framed by two pilots in front of her. As a result, we pay close attention to what she has to say.

This sequence features a pivotal conversation between Luke Skywalker and Obi-Wan. To avoid confusion, each characters’ screen direction remains consistent throughout the sequence. Even when only one of them is on screen, Luke is always on the right while Obi-Wan is always on the left. This straightforward strategy keeps the audience focused and engaged throughout the conversation.


You’ll notice that additional staging approaches are used in this instance as well. Thirds or halves are used in the staging. When Luke and Obi-Wan speak, they are brightly lighted while the set is dark, calling attention to them.

There are numerous staging approaches that can assist an animator, filmmakers, or storytellers in effectively communicating their message. Proper staging can amplify the thoughts of a character, a plot point, or a mood. The trick is to make a notion crystal obvious to the observer.

Now that we have reached the end, we hope you have understood the significance of the 3rd principle of animation and its application to create pitch-perfect animations.

As we know, brands are now commonly using animated videos to expand the horizons of their business. However, not every company owns a video production team, especially a team of animators.

If you’re one of those companies who’re in search of a video animation, then hire BuzzFlick – one of the top animation outsourcing companies offering profound video animation and production services. We have a competent team of animators who are capable of bringing your imagination to life.

From custom whiteboard video to post-production service, we offer it all at a very affordable cost.

Staging is a fundamental animation principle of animation. It directs the attention of the audience towards a particular character or scene in the frame.

The three main components of staging are:

There are 12 Disney principles of animation. We have enlisted all of them below for your convenience: