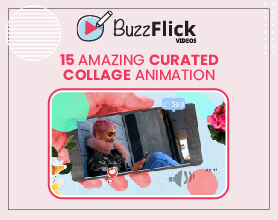 What is a Collage Animation?

To create collage animation, the animator first selects images to trim them to fit in the scene, then assembles the animation software and starts to animate them separately with illustration, adding texture, setting of color, cel animation, and typography.

The artist uses different animation and illustration software in the making of collage animation. This illustration gives aesthetic and abstract visual style to images & art collage, then animates them in compliance with the original’s form and motion.

When was Collage Animation invented?

In 1917, the first collage animation made by Quirino Cristiani was inspired by the silhouette animation by Lotte Reiniger and came into view in a 70-minutes cutout animated film “El Apostol.” After Quirino, Terry Gilliam created a splendid piece of art called “Monty Python’s Flying Circus,” which was also a collage animation film.

What is happening in Collage Animation today?

If we look at the past, collage animation was a very tough and time-consuming art for an artist, but now after the evolution of technologies and the development of various software, collage animation has become easier and quicker.

Animators now use various software that makes animation easier for them and helps them generate more ideas to deliver visions, thoughts, concepts, and imagination in the form of animated videos.

We have collected the top 20 collage animations from all over the globe. Most of them are made in the form of explainer videos but are still magnificent to watch and enjoy. These animations are genuinely the work of art with the attention-grabbing illustration that holds the audience’s eyes.

So let’s get started!

Reality – artist Amier Firdaus made a collage animation, Amier illustrated the impact of the society of this age to the coming generation.

The artist has illustrated how history and leaders have shaped today and how today’s society will change tomorrow.

Amier used Adobe Photoshop, After Effect, and Premiere Pro for illustration. He used artistic and mesmerizing themes to portrays the message correctly. Color combination, music, and animation have been showcased in a very brilliant way.

Naja Meeks is an animator who creates illustrative animation and tells the story through her freestyle art. Fever is an animated collage video in which she elaborates the love of red color for women in a very different and partying style.

The fever is a story of red color to celebrate the mood of women. Meeks used a Srilankan song Pem Rasa Wahena to give a lovely and soft-party-adventure look to the animation.

Must take a look.

Joud Tanta created this video for his university Video Art Class 2018. He cut out and animated the images from vintage and old magazines to give this picture-in-motion look to the video.

He selected random images and uniquely collaged them. He added background music and adjusted the motion of the images accordingly.

This video is a simple yet impressive piece of collage animation. Take a look at this outstanding animation down below.

The Chordettes were the longest-lived vocal group of the 1940s and 1950s. Mastavee used a bright color theme and image motion to make it more vibrant to demonstrate the story of lollipops.

Artist Fernando Reyes has made Travel Vertical – a collage animation video. The video is about life in a vertical motion that how life is different on the different levels of earth and space. The animator put the images and animated them in a vintage way.

There are some best 3D animation software (paid & free) that you can use to make 3D animated videos, and the top 10 3D animation companies around the globe are available to create for you.

The artist tried to grab the attention of the audience by putting topics like global warming and pollution.

Nicolas used keyed-out scenes instead of cut-out images. He used a unique approach to point out a severe topic in a very innovative way.

#7) Black is a Beautiful Struggle

Tony Browne, a motion designer from the UK, created this beautiful animation to celebrate the Black History month in the United Kingdom. This animation depicts the story of the struggles and happy moments of a black person.

Animated images and textured graphics in an abstract style give this video a bold and catchy look, making it worth watching.

Cuba is full of stunning land views. With the blend of African music and vibrant animation, the artist has demonstrated the architecture in Cuba. PRAND is an animation company in Moscow, who made this brilliant architectural tour.

A Spanish video production studio Tigrelab has made this collage animation video, a tour to all cultures and lifestyles worldwide.

In every scene, the images are put together in a way that speaks about the scene.

Munn, After loosing is a handmade animated collage video from The Drawing Room studio. Nol Honig is the artist who used newspaper and magazine pieces to create this artistic work. The music and images create a classical antique look.

#11) Dwayne Johnson – Back Against the Wall

This collage animation tells the real-life story of known Hollywood actor and wrestler Dwayne Johnson, aka The Rock. The animator used strong and expletive language audio clip by Johnson himself to give a more narrative look to this animated video.

Mr. Petros Mamos founded Mamos Beer in 1876. This oldest brand used the collage animation technique to create a marketing video that elaborates the whole journey of Mamos Beer. The stunning transition has been used in the movement of the images that make this video entertaining.

The GE company made a collage animation video to tell the story of an employee who read a letter to her late father, who worked with NASA and GE. This is not a sale-generating video, but this collage animation portrays a narrating touchy video.

DRESS CODE is an award-winning studio that created this masterpiece for General Electric.

Project Ellis is an awareness video to educate the citizen of the USA about their rights and constitution. The animator used the color code of the American flag in the whole video. Collage animation made it more effectual to bring light to the topic.

#15) Space Sex is a Serious Business

This collage animation video has narrated the serious topic of sex in space. It is an animated video that has been made with 3D animation and images with vibrant color combinations.

the animated typography has been used in this video to demonstrate the text in a catchy formation. Not just text but the sequence of images and photos has made this mind-blowing.

Why do you need Collage animation?

The collage animation is a different approach to make creative and attractive animation. This video can be used for brand promotion and marketing. Collage animation helps to connect your audience to your marketing goal. You can use this animation technique to create an informative as well as entertaining video.