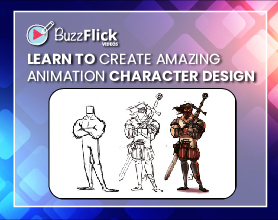 Sophiea Ank
Create your first animation character design from scratch. Learn everything you need to know about animation and draw your characters in styles.

Are you one of them who wants to learn about character design and make your own 2D animation character’s collection, then you have landed on the right blog!

Creating a character from scratch is a bit challenging task for newbies, but this guide will help you get it done in a professional style.

So, without further ado, Let’s begin!

We the evolution of time, character sketching and designing have changed. A few years back, it was done on the canvas of paper with hand and pencil, and now, it gets done on the digital canvas with digital design & sketch pen or software.

What is Animation Character Design?

When you are thinking of creating an animated explainer video, this is where you can use animation character design – a visual art or character design to demonstrate the core message of the video and drive the story.

If we say that the story is incomplete without characters, it justifies the fact that the characters are the central part of any story.

Animation character design is the skill set you will need while making an animated video. Sometimes our imagination has a sketch that fulfills the requirements of the character, but due to lacking in character animation skills, the outcomes are always the opposite to what you have imagined.

But thanks to the evolution of technology, we are living in the era where we have \great animation software to xerox our imagination on the computer screens.

Note: You must learn the difference between 2D animation and 3D animation before starting the character animation. This will help you understand what type of animation you want to include in your video.

Create Your Own Animation Character Designs

Companies and brands use animated explainer videos for business marketing and growth. Uber is one of the examples who animate their explainer video, which helped them increase inter-city rides and 800K+ views in a week.

Check out this explainer video by Uber.

Character animation is not only good for an animated video but also a productive asset to any business. Research has proven that 93% of the companies that run animated explainer video campaigns can make more potential customers than other companies.

Companies use explainer videos to make their targeted audience understand the product better. To achieve this milestone, companies spend hours in research, study, discussions, and decision.

Whether you are interested in 2D animation or 3D animation, this guide will be helpful for you in any case.

Before beginning with the project, do some research because it will help you to know:

After getting the answers to the questions above, the next step is to ask some important questions to yourself about the project:

These answers will help you imagine the character more clearly and move forward toward animation.

2. Understand what type of animation video you are making

After a clear understanding of the targeted audience’s mindset, your next step is to understand the genre of character design that best suits your project persona.

The icon animations are simple and easy to make. These designs are very impactful and easily imprint the mark in the mind of people.

It doesn’t include any prominent characters and balances the whole video on different small icons.

“The New Yorker” publication is known as editorial-style characters. Their characters are usually simple, realistic, and stylish.

Editorial styles character portrays the corporate elegance to the audience and builds a sense of business presence in the industry.

Pop style characters are complete with expression and are usually seen in comics or mascot videos. These characters are the ones which revolve the whole video around them.

These character styles are helpful for fashion, media, food, and comics to build a brand position in the business sector.

Check our blog for different types of animation styles, with examples, for a clear and deep understanding.

Now you know what character you need to make. Start sketching and experimenting with your character.

Before starting it on the software, use the conventional way: hand, paper, and pencil. Try to elaborate the expression and attitude of the characters.

Once your sketch is ready, try to write a story around it.

P.S: work on the script. Add the energy to the story resembles the expression of the character.

Sometimes our imaginations don’t match with the visual thoughts of the audience. So, get a review from the people and alter your character. (re-experimentation)

While creating a character, make sure your character is fulfilling the vision of the story and video.

4. A Signature Pose for The Character

Your character is the puppet of your imagination!

Let’s recall the signature pose of Mr. Clean – a mascot that has been used by Procter & Gamble. Its signature pose, of folded arms, gave the brand high recognition and made it the most used all-purpose cleaner in the 1980s.

P.S: Your character can literally change your brand status, so utilize it creatively.

The last step is to animate the character. Pass your character from the different phases of motion before finalizing the final actions.

This process will help you understand the capabilities of your character’s motion and how you will variate the movements.

You can add effects and movements to your character through animation effect tools. It’s either 2D or 3D; movement is a vital part of motion animation.

But here, we have gathered some of the fantastic 2D animation tools that you can use in your character animation projects.

You can consider this guide as a map for animation character design ideas and methods. It is not the enough information for you to know about animation, you can check out what is 3D animation (a complete guide) and what is 2D animation (a guide) to learn more about 2D & 3D animation.

It would be best if you focus on these animation tips (do’s and don’ts) while animating a video or character.  You can follow the animation process with 7-steps to create an impactful animated video.

While doing the first character animation project, look for the simple animation ideas & inspiration to keep your first run smooth.

We have saved the best for you in the end!

If you want professional assistance in video or character animation, then stop your hunt here! You can contact BuzzFlick – one of the leading animation companies, who is an expert in whiteboard animation, explainer video, 2D animation, 3D modeling, educational video, promotional video, and more.