Animation Books – An Ultimate Animation Expedition Guide for All 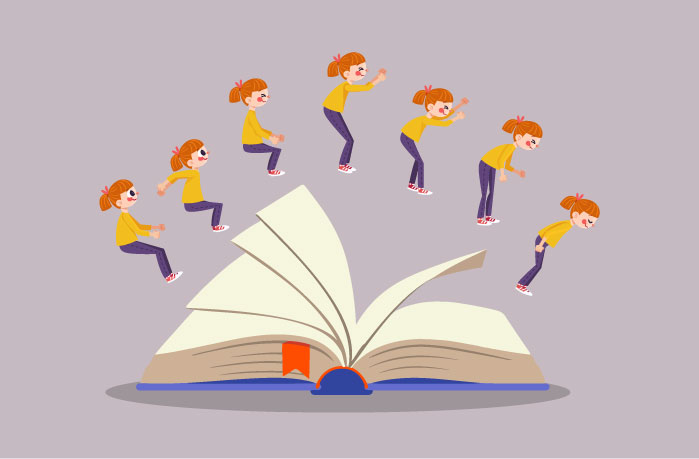 Sophiea Ank
Redesign your animation learning approach with the list of the top 10 animation books of all time and jumpstart your career in the dynamic world of animations.

In all of us, there is a hidden creative animal that wants to explore, create, improvise, and excel. Some are crazy about music, fashion, cooking, or art, but polishing their skills requires some guidance.

In this article, we are going to talk about the famous animation books of all time that professional animators highly suggest.

So, without any further ado, let’s jump right into it!

Animation Books and Its Need

People always enjoy working in the field of interest, and animation has constantly been influencing new and creative minds.

Even before Walt Disney, Cohl created Fantasmagorie in 1908, which is today considered as the first fully animated movie. Fantasmagorie elevated people’s interest in animated films, and within 20 years, animation was pursued as a full-time career.

P.S: If you want to learn more about classic animation, check out the History and Facts about Animation.

With time, the animation industry has given us the masterpieces like Spirited Away, Avatar: The Last Air Bender, Toy Story, Wolfwalkers, and more, which has accelerated the demand for animation.

Today, the animation is not just used for entertainment purposes but is excessively used in almost every field of life. Companies create animated marketing videos to promote their business, showcase their products, and demonstrate their services.

But the process of animation creation followed by the corporate industry and entertainment sector is the same. And to enhance the animation quality and add perfection, some enchiridions are needed.

List of Animation Books for Learning & Honing the Skill

We have looked over the internet and found some ancient (but highly recommended) animation handbooks enriched with knowledge and information. Take a look!

Our first animation book is The Animators Survival Kit by Richard Williams, an award-winning animator of the 20th century.

Williams has worked on projects like Who Framed Roger Rabbit, Pink Panther animation, and The Theif and the Cobbler. Along with animation, he also directed some of the masterpieces himself and became a world-famous animation director.

The Animators Survival Kit was released in 2001 and is the most reliable and authentic animation book – why not! We all know its writer.

The book is considered as a compulsory read for all the newbies in animation. Williams has shared vital techniques, tips & tricks, and practices that he has practiced in his animation career. This book is the ocean of knowledge for the animators, and they can learn uncountable useful hacks to create an impactful animation.

After The Animators Survival Kit, our second-best choice is Cartoon Animation by Preston Blair. The book was released in 1994 and is undoubtedly a valuable source for animators.

The author has worked with big animation houses like Disney and MGM and animated various scenes in Fantasia, Sorcerer’s Apprentice, The Dance of the Hours, Pinocchio, and Bambi.

Blair is known as one of the animators of the Golden Age (1930s to 1970s) and has created countless animation masterpieces in these four decades.

Before his demise, Blair recorded all his secret recipes of animation in his book. You can clearly see his animation style in Droopy Dog and Flintstone, distinguishing him from the rest.

Ed Hooks has served the entertainment industry as an actor, professional-acting instructor, and author of a remarkable animation book Acting for Animators 4.

The book revolves around animation and teaches how to breathe life into a character and make it emotionally appealing to the audience.

It helps you think about the animation from a deeper perspective. It aids you in analyzing what your character is thinking, why your character is performing certain actions, and what expression will suit your animated character in a particular scene.

Hooks published this book in 2017, which is the 4th edition of the Acting for Animation book series. The book has emphasized that the animator should pay extra attention to the tiny details of the character while creating it, which enhances the overall quality of the character.

In 1981, the two best animators of all time, Frank Thomas & Ollie Johnston, released an animation guide named The Illusion of Life: Disney Animation, where they cover all the essential animation techniques.

Thomas & Johnston were the masters of animation and considered as the two of Disney’s Nine Old Men (Disney’s original animators who created masterpieces for the entertainment industry). Snow White and the Seven Dwarfs, Pinocchio, and Bambi are the films that were animated by  Thomas & Johnston.

The book was published in the same year when the two were working on The Fox & the Hound. The book is a must-have for enthusiastic animators who dream of creating projects like Disney Studio.

Our fifth favorite book is Timing for Animation by Harold Whitaker & John Halas. The book was released in 1981, the same year Illusion of Life was published.

Whitaker & Halas emphasized on proper animation framing and time. As the title speaks, timing is the most critical element in animation, and if your fail to for the timings, you might end up at a total loss.

The book suggests animators to give sufficient time, utilize the drawing length, stretch enough space, and perform stretch & squash. This book itself is a library of incredible animation techniques.

Whitaker & Halas were the animators who produced and animated various legendary films of their time. In 1940 London, Halas and his wife Joy started their own animation production company named “Halas & Batchelor”, which later became the house of great animations.

In 1954, the animation company created the first animated feature film in England: The Adaptation to George Orwell’s Animal Farm, which was a total hit in the 50s.

Whitaker also collaborated on various projects and worked on Heavy Metal (a musical sequence) in 1981.

P.S: If you want to see some excellent animation work of our time, you should check out the portfolio of BuzzFlick – a video animation agency.

If we talk about The Princess and the Frog, Hercules, and Wreck-It Ralph, the one name that comes to our mind is Eric Goldberg.

He created magnificent animations, and one of his masterpieces includes Aladdin’s Genie – surely, mindblowing. Goldberg published his book Character Animation Crash Course in 2008, where he focused on educating animators to work more on character detail and personality.

Honestly, after knowing his achievements and watching his work, his book deserves a shot. New animators and professionals can keep his book as a fast-reference guide in animation production.

The book follows a funky and witty tone, which makes the reading and learning fun for the animators. It includes all the tips & tricks, methodologies, approaches, and valuable animation techniques.

Note: We all know that animation is a part of the entertainment industry, but if you want to know more about animation and where to use it, give a read to what is animation used for.

Are you a fan of anime? If yes, then Frame of Anime: Culture & Image-Building by Tze-Yue Hu is for you. It is a massive animation guide that includes the history of anime and the touch of eastern culture.

Tze-Yue Hu published this book in 2010, in which he discussed how to draw an anime character and give a touch of Japanese culture to it.

Today, if you are aiming to create anime characters, this book will help you better understand the history and gist of anime. Hu talked to many professional and expert anime creators in-depth and collected incredible information about animation.

Many readers have reviewed this book as the best anime guideline and suggested it to new readers. The book is a single-sitting-finish with artistic philosophy that suits the newbie as well as experts.

When talking about anime, how can we forget Hayao Miyazaki – one of the top Japanese animation directors.

Miyazaki wrote Starting Point: 1979-1996 (a semi-memoir) in 2014, highlighting his animation career. His book includes many interviews and a complete animation journey from 1979 to 1996.

He created classics like Nausicaa of the Valley of the Wind and My Neighbor Totoro, which are considered as the jewels of anime.

There are so many animators who dream of being successful anime artists, and this book is a total inspiration for them. You can get encouragement by his life journey and how he excelled from a simple animator to a world-known animation director.

9. Talking Animals and Other People By Shamus Culhane

Do you remember the amusing animated characters like Popeye, Woody Woodpecker, and Pluto? Shamus Culhane is the animator behind all these classics.

In 1998, Culhane released a book named Talking Animals and Other People, where Culhane revealed the secrets of character animation.

This book has similarities with the memoir of Miyazaki and covers the life journey of Culhane as an animator. Just like his animation, Culhane put a lot of hard work into his career life to achieve the glory he has right now – the late president of Shamus Culhane Productions.

10. The Making of Fantastic Mr. Fox By Wes Anderson

Unlike his other animated projects, Fantastic Mr. Fox has gorgeous animation and a captivating style that keeps your eyes stuck to the screen. Anderson’s unique animation style magnetizes the audience and the animators.

Readers usually don’t enjoy the BTS, but eager animators and deep learners love to experience the making of the masterpiece; this book is for those. Besides BTS, the book contains amazing animation techniques for those who want to create unforgettable animated characters.

All the mentioned books are excellent for referencing and authored by legendary animators, directors, and animation experts. These books are beneficial for character animation and a lot helpful in complete animation production. If you are planning to excel in the animation industry, these books are your destination’s guiding stars.

If you want to create animations like the classics, then you can count on BuzzFlick – a US-based video animation and production company – master in all styles of animation.

BuzzFlick has created numerous animation projects with renowned companies. The studio proudly welcomes all sorts of businesses, from startups to enterprises.