What is Motion Graphics? Learn Everything 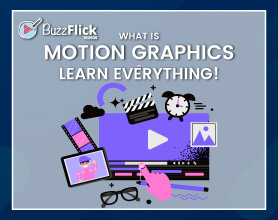 In the digital age, Motion Graphics is a subset of animation that some people find difficult to understand, despite the fact that it is ubiquitous. It’s so common that it’s hard to miss, yet when it comes to commercial animation, it’s a potent weapon.

In the past few years, the world has changed and brought changes in many things. The whole prospect of marketing has also transformed with new promotional trends.

Marketing has been evolved with motion graphics that are generating exemplary revenue and recognition for the companies.

So, without any further ado, let’s jump into it.

Early examples of motion graphics can be seen in Hitchcock’s Psycho, which features an amazing mix of sound, motion, and graphic design that is reminiscent of the style of the time.


This video is enriched with motion graphics that have illustrated the topics comprehensively, and the video delivers the message of global destruction awareness effectively.

A Short History Of Motion Graphics

Graphic Design components were only available in a static, non-moving form before the arrival of motion graphics. Those were the good old days for animated pictures when they were on par with the classic Disney fare.

On the other hand, Motion Design began to gain popularity with the improvements in cinema, notably in the opening titles.

During the 1940s, Oskar Fischinger and Norman McLaren experimented with motion graphics. In the 1950s, pioneering motion graphic artists like Maurice Binder, Saul Bass, and Pablo Ferro brought motion graphics up into the public eye.


For many cinema professionals and Motion Graphics Designers, the films these artists worked on are still a vital source of inspiration and reference.

They employed unconventional methods to create the tone for viewers and convey information about a film’s production company, the director, and the cast.

As a result of this groundbreaking approach to word and image manipulation, which the public had never seen before, Motion Graphics was able to maintain its momentum and finally make it to the big screen and primetime television.

Inseparable as motion graphics and technology are, their evolution is inseparable.

Motion Graphics are now more accessible to everyone who wants to study or produce, thanks to recent developments in design and animation technologies.

At the same time, as screens have become more commonplace, the possibilities for creating and animating content have risen. Motion graphics are now a part of nearly everything, from our cars to billboards to smart refrigerators to the phones in our pockets.

Motion graphics build with an association of design elements and motion. They are bringing design to a medium where time and space components are added to the designed icons or elements.

Motion graphics animators have the liberty to create things using creativity and imagination. Let’s take a look at the following motion graphics examples to understand its utilization in different fields of work.

Promotional videos help you increase product awareness among the customers and investors to generate revenue. Motion graphics in the promo video can enhance entertainment, spark fun, and engage the audience.

Motion graphics are much more affordable than 2D & 3D animation and grab more attention like this 2019 Apple Event video.

A unique way to tell why your brand is the best is powerful motion graphics. In your story reel, you can enlighten your audience on the importance of your brand, product, or service.

Storytelling connects the viewer to your brand emotionally, and motion graphics visually attract them toward your product.

You can use motion graphics videos to increase the conversion rate, decrease the back bounce ratio, cultivate engagement, and highlight your brand story.

BMW has created this motion graphics video to tell how the increasing rate of car marketing has escalated: the cars reflect someone’s lifestyle.

Motion graphics are the best way to visually represent a concept that documentation or presentation cannot explain effectively.

You use motion graphics to explain academic, medical, engineer, agricultural, and many complex topics in an understandable manner and help your audience grasp idea.

USAID has illustrated the importance of women’s empowerment through motion graphics. The background music and encouraging motion design bring warmth to the video.

It is entirely about the narrative. There is no requirement for color or elaborate patterns in order to communicate anything meaningful. Oftentimes, the simplest designs may convey a message more directly while maintaining the story’s integrity.

You can use simple motion graphics in your explainer, motivational, and awareness video.

True Detective’s main title sequence is an excellent example of well-thought-out impactful visuals and undemonstrative typography. The desolate settings mirror the individuals’ inner life and serve as an illustration for the plot — a poisonous swamp of wounded people.

In an interview with The Art of the Title, Creative Director Patrick Clair explained the critical role of story in the design process, stating, “story is always the most fundamental part of our design process.”

La Effe, a satellite television broadcaster, sought a new appearance for its brand that would set them apart from the competition. Designed by Nerdo Creative Studio, the new look includes elements from high-end art magazines, with a heavy focus on typography.

This branding video distinguishes them from the rest of the brands and you usually don’t see these types of creativity on television.

The evolution of big screens to small portable devices has curved out the scope of motion graphics.

People watched films and videos on the big silver screen, which are now available to watch on laptops, tablets, and phones.

Companies in the corporate world hire a studio to create motion graphics designs for their branding and mark their representation among the creative business mindsets. Film and television are also adopting it to bring change in conventional screening.

Educational institutes and awareness centers use motion graphic designs in their campaign to make them more eye-catching and informative to watch.

Motion graphics is a tool that helps out people in every field of life, whether it is advertising, ad campaign, storytelling, marketing, brand promotion, or social media post.

The tech and IT firms demonstrate UI/UX, prototype, and structure design through motion that elevates the viewer’s interest in the project and delivers the concept efficiently.

How to Create Motion Graphics

Before starting a motion graphics project, there are a few things you must keep in mind.

When talking about motion and graphics, it’s more about abstraction than just a basic idea. The abstraction adds expressiveness to the content and conveys the idea in an appealing visualization.

The motion graphics does not rely on the characters on the screen; it more depends upon the idea & concept. Metaphors put more meaning to the video rather than the actual object.

Rhythm is the repetition of the elements in different scenes. The repetition of shapes, colors, or figures helps the audience to feel connected to the content throughout the video.

The rhythm of motion elements draws the audience’s attention toward the message and creates a sense of sequence & motion.

With color effects and rhythm, the reading time is also vital in the video. The movement of the text and typography should give enough time for the audience to read and understand.

If the designer does not spend enough time on the speed of texts and figures, it leads the audience toward misunderstanding and chaos.

But if you want to make an affordable motion graphics video. In that case, you should check out the fantastic work of BuzzFlick – an award-winning animation video production company with a skilled and talented team of animators, editors, directors, and motion graphic designers.

The term motion graphics is defined as the technique of putting a graphic image or design in motion.

Some of the inspiring motion graphics examples are:

Motion graphics are a subset of animation, as the term “animate” refers to the process of giving things life.